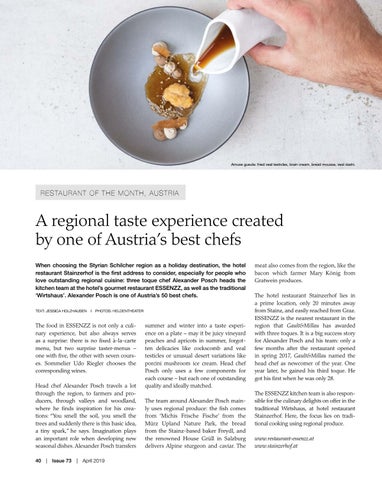 A regional taste experience created by one of Austria’s best chefs When choosing the Styrian Schilcher region as a holiday destination, the hotel restaurant Stainzerhof is the first address to consider, especially for people who love outstanding regional cuisine: three toque chef Alexander Posch heads the kitchen team at the hotel’s gourmet restaurant ESSENZZ, as well as the traditional ‘Wirtshaus’. Alexander Posch is one of Austria’s 50 best chefs. TEXT: JESSICA HOLZHAUSEN I PHOTOS: HELDENTHEATER

The food in ESSENZZ is not only a culinary experience, but also always serves as a surprise: there is no fixed à-la-carte menu, but two surprise taster-menus – one with five, the other with seven courses. Sommelier Udo Riegler chooses the corresponding wines. Head chef Alexander Posch travels a lot through the region, to farmers and producers, through valleys and woodland, where he finds inspiration for his creations: “You smell the soil, you smell the trees and suddenly there is this basic idea, a tiny spark,” he says. Imagination plays an important role when developing new seasonal dishes. Alexander Posch transfers 40  |  Issue 73  |  April 2019

summer and winter into a taste experience on a plate – may it be juicy vineyard peaches and apricots in summer, forgotten delicacies like cockscomb and veal testicles or unusual desert variations like porcini mushroom ice cream. Head chef Posch only uses a few components for each course – but each one of outstanding quality and ideally matched. The team around Alexander Posch mainly uses regional produce: the fish comes from ‘Michis Frische Fische’ from the Mürz Upland Nature Park, the bread from the Stainz-based baker Freydl, and the renowned House Grüll in Salzburg delivers Alpine sturgeon and caviar. The

meat also comes from the region, like the bacon which farmer Mary König from Gratwein produces. The hotel restaurant Stainzerhof lies in a prime location, only 20 minutes away from Stainz, and easily reached from Graz. ESSENZZ is the nearest restaurant in the region that Gault&amp;Millau has awarded with three toques. It is a big success story for Alexander Posch and his team: only a few months after the restaurant opened in spring 2017, Gault&amp;Millau named the head chef as newcomer of the year. One year later, he gained his third toque. He got his first when he was only 28. The ESSENZZ kitchen team is also responsible for the culinary delights on offer in the traditional Wirtshaus, at hotel restaurant Stainzerhof. Here, the focus lies on traditional cooking using regional produce. www.restaurant-essenzz.at www.stainzerhof.at