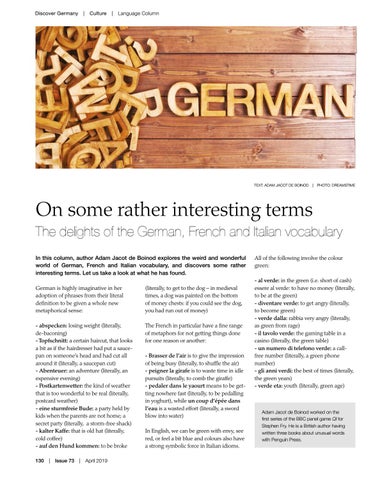 The delights of the German, French and Italian vocabulary In this column, author Adam Jacot de Boinod explores the weird and wonderful world of German, French and Italian vocabulary, and discovers some rather interesting terms. Let us take a look at what he has found. German is highly imaginative in her adoption of phrases from their literal definition to be given a whole new metaphorical sense:

(literally, to get to the dog – in medieval times, a dog was painted on the bottom of money chests: if you could see the dog, you had run out of money)

- abspecken: losing weight (literally, de-baconing) - Topfschnitt: a certain haircut, that looks a bit as if the hairdresser had put a saucepan on someone’s head and had cut all around it (literally, a saucepan cut) - Abenteuer: an adventure (literally, an expensive evening) - Postkartenwetter: the kind of weather that is too wonderful to be real (literally, postcard weather) - eine sturmfreie Bude: a party held by kids when the parents are not home; a secret party (literally, a storm-free shack) - kalter Kaffe: that is old hat (literally, cold coffee) - auf den Hund kommen: to be broke

The French in particular have a fine range of metaphors for not getting things done for one reason or another:

- Brasser de l’air is to give the impression of being busy (literally, to shuffle the air) - peigner la girafe is to waste time in idle pursuits (literally, to comb the giraffe) - pedaler dans le yaourt means to be getting nowhere fast (literally, to be pedalling in yoghurt), while un coup d’épée dans l’eau is a wasted effort (literally, a sword blow into water) In English, we can be green with envy, see red, or feel a bit blue and colours also have a strong symbolic force in Italian idioms.