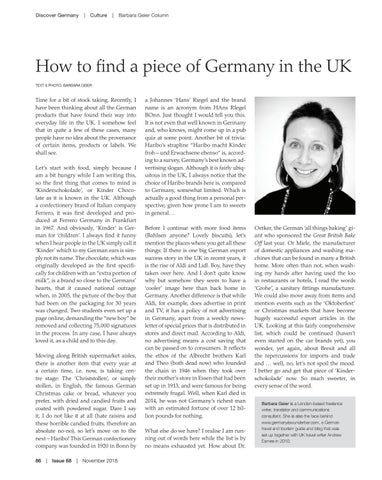 How to find a piece of Germany in the UK TEXT &amp; PHOTO: BARBARA GEIER

Time for a bit of stock taking. Recently, I have been thinking about all the German products that have found their way into everyday life in the UK. I somehow feel that in quite a few of these cases, many people have no idea about the provenance of certain items, products or labels. We shall see. Let’s start with food, simply because I am a bit hungry while I am writing this, so the first thing that comes to mind is ‘Kinderschokolade’, or Kinder Chocolate as it is known in the UK. Although a confectionery brand of Italian company Ferrero, it was first developed and produced at Ferrero Germany in Frankfurt in 1967. And obviously, ‘Kinder’ is German for ‘children’. I always find it funny when I hear people in the UK simply call it ‘Kinder’ which to my German ears is simply not its name. The chocolate, which was originally developed as the first specifically for children with an “extra portion of milk”, is a brand so close to the Germans’ hearts, that it caused national outrage when, in 2005, the picture of the boy that had been on the packaging for 30 years was changed. Two students even set up a page online, demanding the “new boy” be removed and collecting 75,000 signatures in the process. In any case, I have always loved it, as a child and to this day. Moving along British supermarket aisles, there is another item that every year at a certain time, i.e. now, is taking centre stage: The ‘Christstollen’, or simply stollen, in English, the famous German Christmas cake or bread, whatever you prefer, with dried and candied fruits and coated with powdered sugar. Dare I say it, I do not like it at all (hate raisins and these horrible candied fruits, therefore an absolute no-no), so let’s move on to the next – Haribo! This German confectionery company was founded in 1920 in Bonn by 86  |  Issue 68  |  November 2018

a Johannes ‘Hans’ Riegel and the brand name is an acronym from HAns RIegel BOnn. Just thought I would tell you this. It is not even that well known in Germany and, who knows, might come up in a pub quiz at some point. Another bit of trivia: Haribo’s strapline “Haribo macht Kinder froh – und Erwachsene ebenso“ is, according to a survey, Germany’s best known advertising slogan. Although it is fairly ubiquitous in the UK, I always notice that the choice of Haribo brands here is, compared to Germany, somewhat limited. Which is actually a good thing from a personal perspective, given how prone I am to sweets in general… Before I continue with more food items (Bahlsen anyone? Lovely biscuits), let’s mention the places where you get all these things: If there is one big German export success story in the UK in recent years, it is the rise of Aldi and Lidl. Boy, have they taken over here. And I don’t quite know why but somehow they seem to have a ‘cooler’ image here than back home in Germany. Another difference is that while Aldi, for example, does advertise in print and TV, it has a policy of not advertising in Germany, apart from a weekly newsletter of special prices that is distributed in stores and direct mail. According to Aldi, no advertising means a cost saving that can be passed on to consumers. It reflects the ethos of the Albrecht brothers Karl and Theo (both dead now) who founded the chain in 1946 when they took over their mother’s store in Essen that had been set up in 1913, and were famous for being extremely frugal. Well, when Karl died in 2014, he was not Germany’s richest man with an estimated fortune of over 12 billion pounds for nothing. What else do we have? I realise I am running out of words here while the list is by no means exhausted yet. How about Dr.

Oetker, the German ‘all things baking’ giant who sponsored the Great British Bake Off last year. Or Miele, the manufacturer of domestic appliances and washing machines that can be found in many a British home. More often than not, when washing my hands after having used the loo in restaurants or hotels, I read the words ‘Grohe’, a sanitary fittings manufacturer. We could also move away from items and mention events such as the ‘Oktoberfest’ or Christmas markets that have become hugely successful export articles in the UK. Looking at this fairly comprehensive list, which could be continued (haven’t even started on the car brands yet), you wonder, yet again, about Brexit and all the repercussions for imports and trade and … well, no, let’s not spoil the mood. I better go and get that piece of ‘Kinderschokolade’ now. So much sweeter, in every sense of the word. Barbara Geier is a London-based freelance writer, translator and communications consultant. She is also the face behind www.germanyiswunderbar.com, a German travel and tourism guide and blog that was set up together with UK travel writer Andrew Eames in 2010.