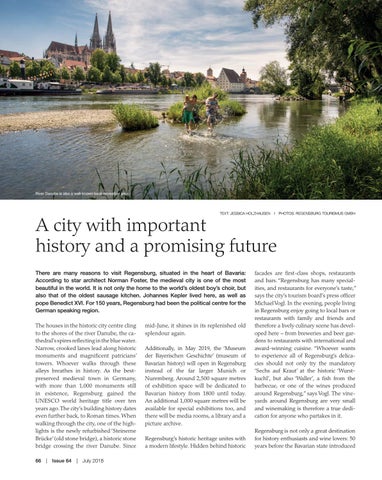 A city with important history and a promising future There are many reasons to visit Regensburg, situated in the heart of Bavaria: According to star architect Norman Foster, the medieval city is one of the most beautiful in the world. It is not only the home to the world’s oldest boy’s choir, but also that of the oldest sausage kitchen. Johannes Kepler lived here, as well as pope Benedict XVI. For 150 years, Regensburg had been the political centre for the German speaking region. The houses in the historic city centre cling to the shores of the river Danube, the cathedral’s spires reflecting in the blue water. Narrow, crooked lanes lead along historic monuments and magnificent patricians’ towers. Whoever walks through these alleys breathes in history. As the bestpreserved medieval town in Germany, with more than 1,000 monuments still in existence, Regensburg gained the UNESCO world heritage title over ten years ago. The city’s building history dates even further back, to Roman times. When walking through the city, one of the highlights is the newly refurbished ‘Steinerne Brücke’ (old stone bridge), a historic stone bridge crossing the river Danube. Since 66  |  Issue 64  |  July 2018

mid-June, it shines in its replenished old splendour again. Additionally, in May 2019, the ‘Museum der Bayerischen Geschichte’ (museum of Bavarian history) will open in Regensburg instead of the far larger Munich or Nuremberg. Around 2,500 square metres of exhibition space will be dedicated to Bavarian history from 1800 until today. An additional 1,000 square metres will be available for special exhibitions too, and there will be media rooms, a library and a picture archive. Regensburg’s historic heritage unites with a modern lifestyle. Hidden behind historic

facades are first-class shops, restaurants and bars. “Regensburg has many specialities, and restaurants for everyone’s taste,” says the city’s tourism board’s press officer Michael Vogl. In the evening, people living in Regensburg enjoy going to local bars or restaurants with family and friends and therefore a lively culinary scene has developed here – from breweries and beer gardens to restaurants with international and award-winning cuisine. “Whoever wants to experience all of Regensburg’s delicacies should not only try the mandatory ‘Sechs auf Kraut’ at the historic ‘Wurstkuchl’, but also ‘Waller’, a fish from the barbecue, or one of the wines produced around Regensburg,” says Vogl. The vineyards around Regensburg are very small and winemaking is therefore a true dedication for anyone who partakes in it. Regensburg is not only a great destination for history enthusiasts and wine lovers: 50 years before the Bavarian state introduced