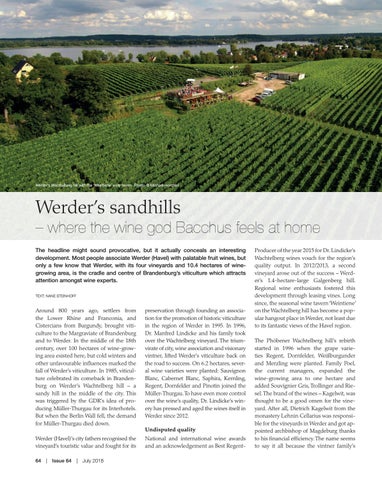 – where the wine god Bacchus feels at home The headline might sound provocative, but it actually conceals an interesting development. Most people associate Werder (Havel) with palatable fruit wines, but only a few know that Werder, with its four vineyards and 10.4 hectares of winegrowing area, is the cradle and centre of Brandenburg’s viticulture which attracts attention amongst wine experts. TEXT: NANE STEINHOFF

Around 800 years ago, settlers from the Lower Rhine and Franconia, and Cistercians from Burgundy, brought viticulture to the Margraviate of Brandenburg and to Werder. In the middle of the 18th century, over 100 hectares of wine-growing area existed here, but cold winters and other unfavourable influences marked the fall of Werder’s viticulture. In 1985, viticulture celebrated its comeback in Brandenburg on Werder’s Wachtelberg hill – a sandy hill in the middle of the city. This was triggered by the GDR’s idea of producing Müller-Thurgau for its Interhotels. But when the Berlin Wall fell, the demand for Müller-Thurgau died down.

preservation through founding an association for the promotion of historic viticulture in the region of Werder in 1995. In 1996, Dr. Manfred Lindicke and his family took over the Wachtelberg vineyard. The triumvirate of city, wine association and visionary vintner, lifted Werder’s viticulture back on the road to success. On 6.2 hectares, several wine varieties were planted: Sauvignon Blanc, Cabernet Blanc, Saphira, Kernling, Regent, Dornfelder and Pinotin joined the Müller-Thurgau. To have even more control over the wine’s quality, Dr. Lindicke’s winery has pressed and aged the wines itself in Werder since 2012.

National and international wine awards and an acknowledgement as Best Regent-

Producer of the year 2015 for Dr. Lindicke’s Wachtelberg wines vouch for the region’s quality output. In 2012/2013, a second vineyard arose out of the success – Werder’s 1.4-hectare-large Galgenberg hill. Regional wine enthusiasts fostered this development through leasing vines. Long since, the seasonal wine tavern ‘Weintiene’ on the Wachtelberg hill has become a popular hangout place in Werder, not least due to its fantastic views of the Havel region. The Phöbener Wachtelberg hill’s rebirth started in 1996 when the grape varieties Regent, Dornfelder, Weißburgunder and Merzling were planted. Family Poel, the current managers, expanded the wine-growing area to one hectare and added Souvignier Gris, Trollinger and Riesel. The brand of the wines – Kagelwit, was thought to be a good omen for the vineyard. After all, Dietrich Kagelwit from the monastery Lehnin Cellarius was responsible for the vineyards in Werder and got appointed archbishop of Magdeburg thanks to his financial efficiency. The name seems to say it all because the vintner family’s