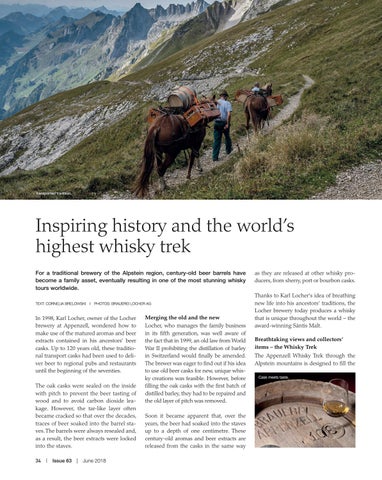 Inspiring history and the world’s highest whisky trek For a traditional brewery of the Alpstein region, century-old beer barrels have become a family asset, eventually resulting in one of the most stunning whisky tours worldwide. TEXT: CORNELIA BRELOWSKI  I  PHOTOS: BRAUEREI LOCHER AG

In 1998, Karl Locher, owner of the Locher brewery at Appenzell, wondered how to make use of the matured aromas and beer extracts contained in his ancestors‘ beer casks. Up to 120 years old, these traditional transport casks had been used to deliver beer to regional pubs and restaurants until the beginning of the seventies. The oak casks were sealed on the inside with pitch to prevent the beer tasting of wood and to avoid carbon dioxide leakage. However, the tar-like layer often became cracked so that over the decades, traces of beer soaked into the barrel staves. The barrels were always resealed and, as a result, the beer extracts were locked into the staves. 34  |  Issue 63  |  June 2018

Merging the old and the new Locher, who manages the family business in its fifth generation, was well aware of the fact that in 1999, an old law from World War II prohibiting the distillation of barley in Switzerland would finally be amended. The brewer was eager to find out if his idea to use old beer casks for new, unique whisky creations was feasible. However, before filling the oak casks with the first batch of distilled barley, they had to be repaired and the old layer of pitch was removed. Soon it became apparent that, over the years, the beer had soaked into the staves up to a depth of one centimetre. These century-old aromas and beer extracts are released from the casks in the same way

as they are released at other whisky producers, from sherry, port or bourbon casks. Thanks to Karl Locher‘s idea of breathing new life into his ancestors‘ traditions, the Locher brewery today produces a whisky that is unique throughout the world – the award-winning Säntis Malt. Breathtaking views and collectors‘ items – the Whisky Trek The Appenzell Whisky Trek through the Alpstein mountains is designed to fill the Cask meets taste.