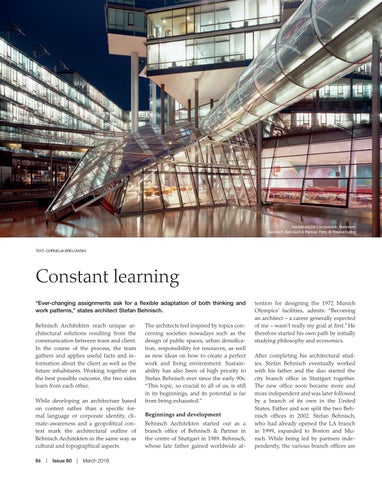 Constant learning “Ever-changing assignments ask for a flexible adaptation of both thinking and work patterns,” states architect Stefan Behnisch. Behnisch Architekten reach unique architectural solutions resulting from the communication between team and client. In the course of the process, the team gathers and applies useful facts and information about the client as well as the future inhabitants. Working together on the best possible outcome, the two sides learn from each other. While developing an architecture based on content rather than a specific formal language or corporate identity, climate-awareness and a geopolitical context mark the architectural outline of Behnisch Architekten in the same way as cultural and topographical aspects. 86  |  Issue 60  |  March 2018

The architects feel inspired by topics concerning societies nowadays such as the design of public spaces, urban densification, responsibility for resources, as well as new ideas on how to create a perfect work and living environment. Sustainability has also been of high priority to Stefan Behnisch ever since the early 90s: “This topic, so crucial to all of us, is still in its beginnings, and its potential is far from being exhausted.” Beginnings and development Behnisch Architekten started out as a branch office of Behnisch &amp; Partner in the centre of Stuttgart in 1989. Behnisch, whose late father gained worldwide at-

tention for designing the 1972 Munich Olympics’ facilities, admits: “Becoming an architect – a career generally expected of me – wasn’t really my goal at first.” He therefore started his own path by initially studying philosophy and economics. After completing his architectural studies, Stefan Behnisch eventually worked with his father and the duo started the city branch office in Stuttgart together. The new office soon became more and more independent and was later followed by a branch of its own in the United States. Father and son split the two Behnisch offices in 2002. Stefan Behnisch, who had already opened the LA branch in 1999, expanded to Boston and Munich. While being led by partners independently, the various branch offices are