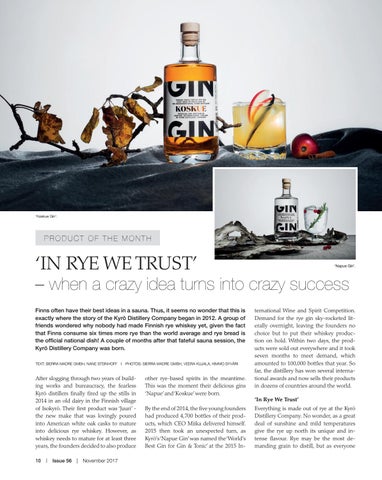 PRODUCT OF THE MONTH

‘IN RYE WE TRUST’

– when a crazy idea turns into crazy success Finns often have their best ideas in a sauna. Thus, it seems no wonder that this is exactly where the story of the Kyrö Distillery Company began in 2012. A group of friends wondered why nobody had made Finnish rye whiskey yet, given the fact that Finns consume six times more rye than the world average and rye bread is the official national dish! A couple of months after that fateful sauna session, the Kyrö Distillery Company was born. TEXT: SIERRA MADRE GMBH, NANE STEINHOFF  I  PHOTOS: SIERRA MADRE GMBH, VEERA KUJALA, KIMMO SYVÄRI

After slogging through two years of building works and bureaucracy, the fearless Kyrö distillers finally fired up the stills in 2014 in an old dairy in the Finnish village of Isokyrö. Their first product was ‘Juuri’ the new make that was lovingly poured into American white oak casks to mature into delicious rye whiskey. However, as whiskey needs to mature for at least three years, the founders decided to also produce 10  |  Issue 56  |  November 2017

other rye-based spirits in the meantime. This was the moment their delicious gins ‘Napue’ and ‘Koskue’ were born. By the end of 2014, the five young founders had produced 4,700 bottles of their products, which CEO Miika delivered himself. 2015 then took an unexpected turn, as Kyrö’s ‘Napue Gin’ was named the ‘World’s Best Gin for Gin & Tonic’ at the 2015 In-

ternational Wine and Spirit Competition. Demand for the rye gin sky-rocketed literally overnight, leaving the founders no choice but to put their whiskey production on hold. Within two days, the products were sold out everywhere and it took seven months to meet demand, which amounted to 100,000 bottles that year. So far, the distillery has won several international awards and now sells their products in dozens of countries around the world. ‘In Rye We Trust’ Everything is made out of rye at the Kyrö Distillery Company. No wonder, as a great deal of sunshine and mild temperatures give the rye up north its unique and intense flavour. Rye may be the most demanding grain to distill, but as everyone