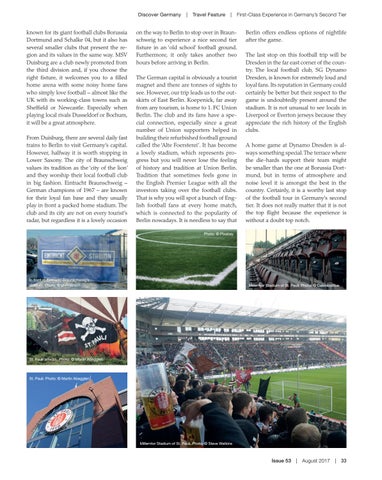 known for its giant football clubs Borussia Dortmund and Schalke 04, but it also has several smaller clubs that present the region and its values in the same way. MSV Duisburg are a club newly promoted from the third division and, if you choose the right fixture, it welcomes you to a filled home arena with some noisy home fans who simply love football – almost like the UK with its working-class towns such as Sheffield or Newcastle. Especially when playing local rivals Dusseldorf or Bochum, it will be a great atmosphere. From Duisburg, there are several daily fast trains to Berlin to visit Germany’s capital. However, halfway it is worth stopping in Lower Saxony. The city of Braunschweig values its tradition as the ‘city of the lion’ and they worship their local football club in big fashion. Eintracht Braunschweig – German champions of 1967 – are known for their loyal fan base and they usually play in front a packed home stadium. The club and its city are not on every tourist’s radar, but regardless it is a lovely occasion

on the way to Berlin to stop over in Braunschweig to experience a nice second tier fixture in an ‘old school’ football ground. Furthermore, it only takes another two hours before arriving in Berlin. The German capital is obviously a tourist magnet and there are tonnes of sights to see. However, our trip leads us to the outskirts of East Berlin. Koepenick, far away from any tourism, is home to 1. FC Union Berlin. The club and its fans have a special connection, especially since a great number of Union supporters helped in building their refurbished football ground called the ‘Alte Foersterei’. It has become a lovely stadium, which represents progress but you will never lose the feeling of history and tradition at Union Berlin. Tradition that sometimes feels gone in the English Premier League with all the investors taking over the football clubs. That is why you will spot a bunch of English football fans at every home match, which is connected to the popularity of Berlin nowadays. It is needless to say that

Berlin offers endless options of nightlife after the game. The last stop on this football trip will be Dresden in the far east corner of the country. The local football club, SG Dynamo Dresden, is known for extremely loud and loyal fans. Its reputation in Germany could certainly be better but their respect to the game is undoubtedly present around the stadium. It is not unusual to see locals in Liverpool or Everton jerseys because they appreciate the rich history of the English clubs. A home game at Dynamo Dresden is always something special. The terrace where the die-hards support their team might be smaller than the one at Borussia Dortmund, but in terms of atmosphere and noise level it is amongst the best in the country. Certainly, it is a worthy last stop of the football tour in Germany’s second tier. It does not really matter that it is not the top flight because the experience is without a doubt top notch.