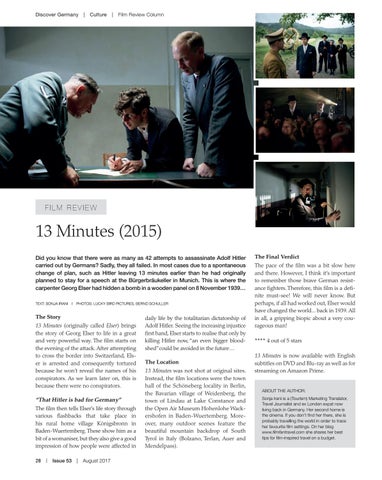 13 Minutes (2015) Did you know that there were as many as 42 attempts to assassinate Adolf Hitler carried out by Germans? Sadly, they all failed. In most cases due to a spontaneous change of plan, such as Hitler leaving 13 minutes earlier than he had originally planned to stay for a speech at the Bürgerbräukeller in Munich. This is where the carpenter Georg Elser had hidden a bomb in a wooden panel on 8 November 1939… TEXT: SONJA IRANI  I  PHOTOS: LUCKY BIRD PICTURES, BERND SCHULLER

The Story 13 Minutes (originally called Elser) brings the story of Georg Elser to life in a great and very powerful way. The film starts on the evening of the attack. After attempting to cross the border into Switzerland, Elser is arrested and consequently tortured because he won’t reveal the names of his conspirators. As we learn later on, this is because there were no conspirators.

“That Hitler is bad for Germany” The film then tells Elser’s life story through various flashbacks that take place in his rural home village Königsbronn in Baden-Wuertemberg. These show him as a bit of a womaniser, but they also give a good impression of how people were affected in 28  |  Issue 53  |  August 2017

daily life by the totalitarian dictatorship of Adolf Hitler. Seeing the increasing injustice first hand, Elser starts to realise that only by killing Hitler now, “an even bigger bloodshed”could be avoided in the future… The Location 13 Minutes was not shot at original sites. Instead, the film locations were the town hall of the Schöneberg locality in Berlin, the Bavarian village of Weidenberg, the town of Lindau at Lake Constance and the Open Air Museum Hohenlohe Wackershofen in Baden-Wuertemberg. Moreover, many outdoor scenes feature the beautiful mountain backdrop of South Tyrol in Italy (Bolzano, Terlan, Auer and Mendelpass).

The Final Verdict The pace of the film was a bit slow here and there. However, I think it’s important to remember those brave German resistance fighters. Therefore, this film is a definite must-see! We will never know. But perhaps, if all had worked out, Elser would have changed the world... back in 1939. All in all, a gripping biopic about a very courageous man! **** 4 out of 5 stars 13 Minutes is now available with English subtitles on DVD and Blu-ray as well as for streaming on Amazon Prime. ABOUT THE AUTHOR: Sonja Irani is a (Tourism) Marketing Translator, Travel Journalist and ex London expat now living back in Germany. Her second home is the cinema. If you don't find her there, she is probably travelling the world in order to trace her favourite film settings. On her blog www.filmfantravel.com she shares her best tips for film-inspired travel on a budget.