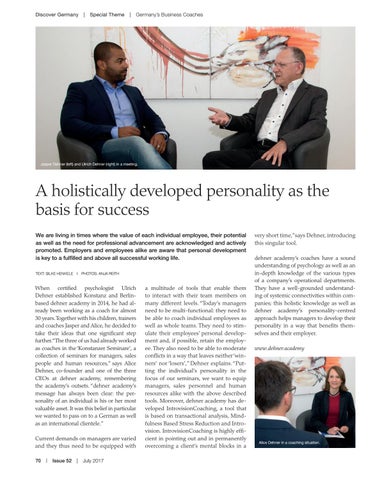 Jasper Dehner (left) and Ulrich Dehner (right) in a meeting.

A holistically developed personality as the basis for success We are living in times where the value of each individual employee, their potential as well as the need for professional advancement are acknowledged and actively promoted. Employers and employees alike are aware that personal development is key to a fulfilled and above all successful working life. TEXT: SILKE HENKELE  I  PHOTOS: ANJA REITH

When certified psychologist Ulrich Dehner established Konstanz and Berlinbased dehner academy in 2014, he had already been working as a coach for almost 30 years. Together with his children, trainers and coaches Jasper and Alice, he decided to take their ideas that one significant step further.“The three of us had already worked as coaches in the ‘Konstanzer Seminare’, a collection of seminars for managers, sales people and human resources,” says Alice Dehner, co-founder and one of the three CEOs at dehner academy, remembering the academy’s outsets. “dehner academy’s message has always been clear: the personality of an individual is his or her most valuable asset. It was this belief in particular we wanted to pass on to a German as well as an international clientele.” Current demands on managers are varied and they thus need to be equipped with 70  |  Issue 52  |  July 2017

a multitude of tools that enable them to interact with their team members on many different levels. “Today’s managers need to be multi-functional: they need to be able to coach individual employees as well as whole teams. They need to stimulate their employees’ personal development and, if possible, retain the employee. They also need to be able to moderate conflicts in a way that leaves neither ‘winners‘ nor ‘losers’,” Dehner explains. “Putting the individual’s personality in the focus of our seminars, we want to equip managers, sales personnel and human resources alike with the above described tools. Moreover, dehner academy has developed IntrovisionCoaching, a tool that is based on transactional analysis, Mindfulness Based Stress Reduction and Introvision. IntrovisionCoaching is highly efficient in pointing out and in permanently overcoming a client’s mental blocks in a

very short time,”says Dehner, introducing this singular tool. dehner academy’s coaches have a sound understanding of psychology as well as an in-depth knowledge of the various types of a company’s operational departments. They have a well-grounded understanding of systemic connectivities within companies; this holistic knowledge as well as dehner academy’s personality-centred approach helps managers to develop their personality in a way that benefits themselves and their employer. www.dehner.academy

Alice Dehner in a coaching situation.