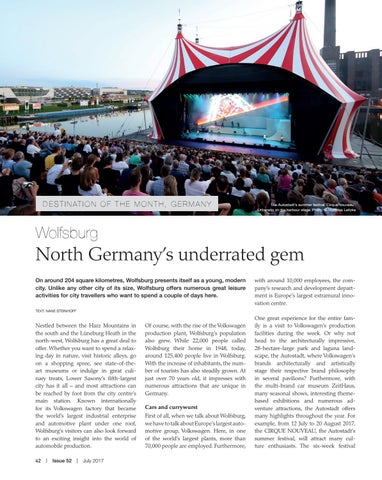 North Germany’s underrated gem On around 204 square kilometres, Wolfsburg presents itself as a young, modern city. Unlike any other city of its size, Wolfsburg offers numerous great leisure activities for city travellers who want to spend a couple of days here.

with around 10,000 employees, the company’s research and development department is Europe’s largest extramural innovation centre.

Nestled between the Harz Mountains in the south and the Lüneburg Heath in the north-west, Wolfsburg has a great deal to offer. Whether you want to spend a relaxing day in nature, visit historic alleys, go on a shopping spree, see state-of-theart museums or indulge in great culinary treats, Lower Saxony’s fifth-largest city has it all – and most attractions can be reached by foot from the city centre’s main station. Known internationally for its Volkswagen factory that became the world’s largest industrial enterprise and automotive plant under one roof, Wolfsburg’s visitors can also look forward to an exciting insight into the world of automobile production. 42  |  Issue 52  |  July 2017

Of course, with the rise of the Volkswagen production plant, Wolfsburg’s population also grew. While 22,000 people called Wolfsburg their home in 1948, today, around 125,400 people live in Wolfsburg. With the increase of inhabitants, the number of tourists has also steadily grown. At just over 70 years old, it impresses with numerous attractions that are unique in Germany. Cars and currywurst First of all, when we talk about Wolfsburg, we have to talk about Europe’s largest automotive group, Volkswagen. Here, in one of the world’s largest plants, more than 70,000 people are employed. Furthermore,

One great experience for the entire family is a visit to Volkswagen’s production facilities during the week. Or why not head to the architecturally impressive, 28-hectare-large park and laguna landscape, the Autostadt, where Volkswagen’s brands architecturally and artistically stage their respective brand philosophy in several pavilions? Furthermore, with the multi-brand car museum ZeitHaus, many seasonal shows, interesting themebased exhibitions and numerous adventure attractions, the Autostadt offers many highlights throughout the year. For example, from 12 July to 20 August 2017, the CIRQUE NOUVEAU, the Autostadt’s summer festival, will attract many culture enthusiasts. The six-week festival