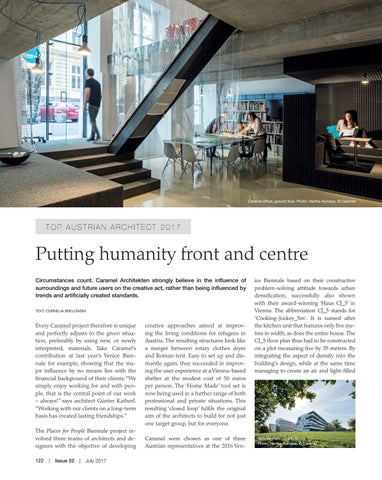 Putting humanity front and centre Circumstances count. Caramel Architekten strongly believe in the influence of surroundings and future users on the creative act, rather than being influenced by trends and artificially created standards. TEXT: CORNELIA BRELOWSKI

Every Caramel project therefore is unique and perfectly adjusts to the given situation, preferably by using new, or newly interpreted, materials. Take Caramel’s contribution at last year’s Venice Biennale for example, showing that the major influence by no means lies with the financial background of their clients: “We simply enjoy working for and with people, that is the central point of our work – always!” says architect Günter Katherl. “Working with our clients on a long-term basis has created lasting friendships.” The Places for People Biennale project involved three teams of architects and designers with the objective of developing 122  |  Issue 52  |  July 2017

creative approaches aimed at improving the living conditions for refugees in Austria. The resulting structures look like a merger between rotary clothes dryer and Roman tent. Easy to set up and dismantle again, they succeeded in improving the user experience at a Vienna-based shelter at the modest cost of 50 euros per person. The ‘Home Made’ tool set is now being used in a further range of both professional and private situations. This resulting ‘closed loop’ fulfils the original aim of the architects to build for not just one target group, but for everyone. Caramel were chosen as one of three Austrian representatives at the 2016 Ven-

ice Biennale based on their constructive problem-solving attitude towards urban densification, successfully also shown with their award-winning ‘Haus CJ_5’ in Vienna. The abbreviation CJ_5 stands for ‘Cooking-Jockey_5m’. It is named after the kitchen unit that features only five metres in width, as does the entire house. The CJ_5 floor plan thus had to be constructed on a plot measuring five by 35 metres. By integrating the aspect of density into the building’s design, while at the same time managing to create an air and light-filled