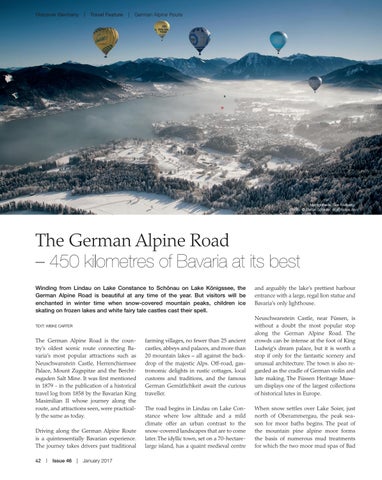 The German Alpine Road – 450 kilometres of Bavaria at its best Winding from Lindau on Lake Constance to Schönau on Lake Königssee, the German Alpine Road is beautiful at any time of the year. But visitors will be enchanted in winter time when snow-covered mountain peaks, children ice skating on frozen lakes and white fairy tale castles cast their spell.

farming villages, no fewer than 25 ancient castles, abbeys and palaces, and more than 20 mountain lakes – all against the backdrop of the majestic Alps. Off-road, gastronomic delights in rustic cottages, local customs and traditions, and the famous German Gemütlichkeit await the curious traveller.

Neuschwanstein Castle, near Füssen, is without a doubt the most popular stop along the German Alpine Road. The crowds can be intense at the foot of King Ludwig’s dream palace, but it is worth a stop if only for the fantastic scenery and unusual architecture. The town is also regarded as the cradle of German violin and lute making. The Füssen Heritage Museum displays one of the largest collections of historical lutes in Europe.

The road begins in Lindau on Lake Constance where low altitude and a mild climate offer an urban contrast to the snow-covered landscapes that are to come later. The idyllic town, set on a 70-hectarelarge island, has a quaint medieval centre

When snow settles over Lake Soier, just north of Oberammergau, the peak season for moor baths begins. The peat of the mountain pine alpine moor forms the basis of numerous mud treatments for which the two moor mud spas of Bad

The German Alpine Road is the country’s oldest scenic route connecting Bavaria’s most popular attractions such as Neuschwanstein Castle, Herrenchiemsee Palace, Mount Zugspitze and the Berchtesgaden Salt Mine. It was first mentioned in 1879 - in the publication of a historical travel log from 1858 by the Bavarian King Maximilian II whose journey along the route, and attractions seen, were practically the same as today. Driving along the German Alpine Route is a quintessentially Bavarian experience. The journey takes drivers past traditional 42  |  Issue 46  |  January 2017

and arguably the lake’s prettiest harbour entrance with a large, regal lion statue and Bavaria’s only lighthouse.