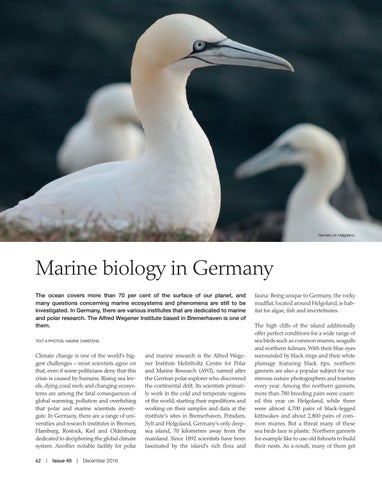 Marine biology in Germany The ocean covers more than 70 per cent of the surface of our planet, and many questions concerning marine ecosystems and phenomena are still to be investigated. In Germany, there are various institutes that are dedicated to marine and polar research. The Alfred Wegener Institute based in Bremerhaven is one of them. TEXT &amp; PHOTOS: NADINE CARSTENS

Climate change is one of the world’s biggest challenges – most scientists agree on that, even if some politicians deny that this crisis is caused by humans. Rising sea levels, dying coral reefs and changing ecosystems are among the fatal consequences of global warming, pollution and overfishing that polar and marine scientists investigate. In Germany, there are a range of universities and research institutes in Bremen, Hamburg, Rostock, Kiel and Oldenburg dedicated to deciphering the global climate system. Another notable facility for polar 62  |  Issue 45  |  December 2016

and marine research is the Alfred Wegener Institute Helmholtz Centre for Polar and Marine Research (AWI), named after the German polar explorer who discovered the continental drift. Its scientists primarily work in the cold and temperate regions of the world, starting their expeditions and working on their samples and data at the institute’s sites in Bremerhaven, Potsdam, Sylt and Helgoland, Germany’s only deepsea island, 70 kilometres away from the mainland. Since 1892 scientists have been fascinated by the island’s rich flora and

fauna: Being unique to Germany, the rocky mudflat, located around Helgoland, is habitat for algae, fish and invertebrates. The high cliffs of the island additionally offer perfect conditions for a wide range of sea birds such as common murres, seagulls and northern fulmars. With their blue eyes surrounded by black rings and their white plumage featuring black tips, northern gannets are also a popular subject for numerous nature photographers and tourists every year. Among the northern gannets, more than 780 breeding pairs were counted this year on Helgoland, while there were almost 4,700 pairs of black-legged kittiwakes and about 2,800 pairs of common murres. But a threat many of these sea birds face is plastic: Northern gannets for example like to use old fishnets to build their nests. As a result, many of them get