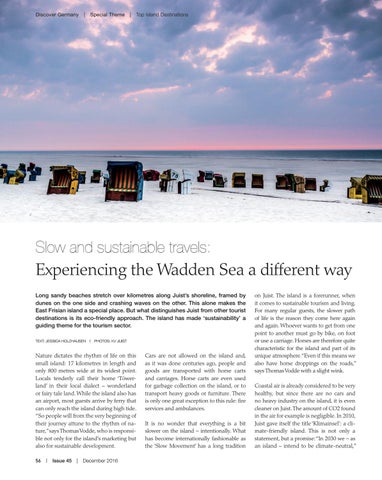 Experiencing the Wadden Sea a different way Long sandy beaches stretch over kilometres along Juist’s shoreline, framed by dunes on the one side and crashing waves on the other. This alone makes the East Frisian island a special place. But what distinguishes Juist from other tourist destinations is its eco-friendly approach. The island has made ‘sustainability’ a guiding theme for the tourism sector. TEXT: JESSICA HOLZHAUSEN  I  PHOTOS: KV JUIST

Nature dictates the rhythm of life on this small island: 17 kilometres in length and only 800 metres wide at its widest point. Locals tenderly call their home ‘Töwerland’ in their local dialect – wonderland or fairy tale land. While the island also has an airport, most guests arrive by ferry that can only reach the island during high tide. “So people will from the very beginning of their journey attune to the rhythm of nature,”says Thomas Vodde, who is responsible not only for the island’s marketing but also for sustainable development. 56  |  Issue 45  |  December 2016

Cars are not allowed on the island and, as it was done centuries ago, people and goods are transported with horse carts and carriages. Horse carts are even used for garbage collection on the island, or to transport heavy goods or furniture. There is only one great exception to this rule: fire services and ambulances. It is no wonder that everything is a bit slower on the island – intentionally. What has become internationally fashionable as the ‘Slow Movement’ has a long tradition

on Juist. The island is a forerunner, when it comes to sustainable tourism and living. For many regular guests, the slower path of life is the reason they come here again and again. Whoever wants to get from one point to another must go by bike, on foot or use a carriage. Horses are therefore quite characteristic for the island and part of its unique atmosphere.“Even if this means we also have horse droppings on the roads,” says Thomas Vodde with a slight wink. Coastal air is already considered to be very healthy, but since there are no cars and no heavy industry on the island, it is even cleaner on Juist. The amount of CO2 found in the air for example is negligible. In 2010, Juist gave itself the title ‘Klimainsel’: a climate-friendly island. This is not only a statement, but a promise: “In 2030 we – as an island – intend to be climate-neutral,”