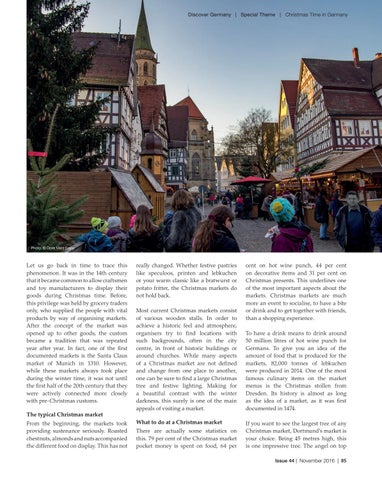 Let us go back in time to trace this phenomenon. It was in the 14th century that it became common to allow craftsmen and toy manufacturers to display their goods during Christmas time. Before, this privilege was held by grocery traders only, who supplied the people with vital products by way of organising markets. After the concept of the market was opened up to other goods, the custom became a tradition that was repeated year after year. In fact, one of the first documented markets is the Santa Claus market of Munich in 1310. However, while these markets always took place during the winter time, it was not until the first half of the 20th century that they were actively connected more closely with pre-Christmas customs. The typical Christmas market From the beginning, the markets took providing sustenance seriously. Roasted chestnuts, almonds and nuts accompanied the different food on display. This has not

really changed. Whether festive pastries like speculoos, printen and lebkuchen or your warm classic like a bratwurst or potato fritter, the Christmas markets do not hold back. Most current Christmas markets consist of various wooden stalls. In order to achieve a historic feel and atmosphere, organisers try to find locations with such backgrounds, often in the city centre, in front of historic buildings or around churches. While many aspects of a Christmas market are not defined and change from one place to another, one can be sure to find a large Christmas tree and festive lighting. Making for a beautiful contrast with the winter darkness, this surely is one of the main appeals of visiting a market. What to do at a Christmas market There are actually some statistics on this. 79 per cent of the Christmas market pocket money is spent on food, 64 per

cent on hot wine punch, 44 per cent on decorative items and 31 per cent on Christmas presents. This underlines one of the most important aspects about the markets. Christmas markets are much more an event to socialise, to have a bite or drink and to get together with friends, than a shopping experience. To have a drink means to drink around 50 million litres of hot wine punch for Germans. To give you an idea of the amount of food that is produced for the markets, 82,000 tonnes of lebkuchen were produced in 2014. One of the most famous culinary items on the market menus is the Christmas stollen from Dresden. Its history is almost as long as the idea of a market, as it was first documented in 1474. If you want to see the largest tree of any Christmas market, Dortmundâ&amp;#x20AC;&amp;#x2122;s market is your choice. Being 45 metres high, this is one impressive tree. The angel on top Issue 44 | November 2016 | 85