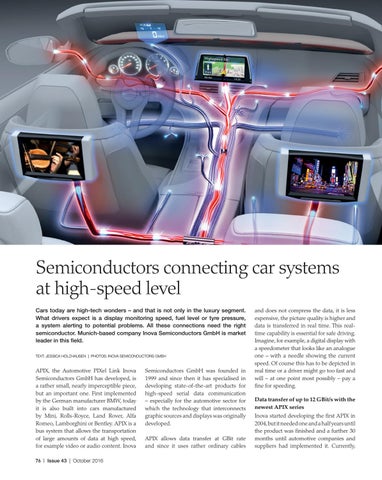 Semiconductors connecting car systems at high-speed level Cars today are high-tech wonders – and that is not only in the luxury segment. What drivers expect is a display monitoring speed, fuel level or tyre pressure, a system alerting to potential problems. All these connections need the right semiconductor. Munich-based company Inova Semiconductors GmbH is market leader in this field. TEXT: JESSICA HOLZHAUSEN | PHOTOS: INOVA SEMICONDUCTORS GMBH

APIX, the Automotive PIXel Link Inova Semiconductors GmbH has developed, is a rather small, nearly imperceptible piece, but an important one. First implemented by the German manufacturer BMW, today it is also built into cars manufactured by Mini, Rolls-Royce, Land Rover, Alfa Romeo, Lamborghini or Bentley. APIX is a bus system that allows the transportation of large amounts of data at high speed, for example video or audio content. Inova 76 | Issue 43 | October 2016

Semiconductors GmbH was founded in 1999 and since then it has specialised in developing state-of-the-art products for high-speed serial data communication – especially for the automotive sector for which the technology that interconnects graphic sources and displays was originally developed. APIX allows data transfer at GBit rate and since it uses rather ordinary cables

and does not compress the data, it is less expensive, the picture quality is higher and data is transferred in real time. This realtime capability is essential for safe driving. Imagine, for example, a digital display with a speedometer that looks like an analogue one – with a needle showing the current speed. Of course this has to be depicted in real time or a driver might go too fast and will – at one point most possibly – pay a fine for speeding. Data transfer of up to 12 GBit/s with the newest APIX series Inova started developing the first APIX in 2004, but it needed one and a half years until the product was finished and a further 30 months until automotive companies and suppliers had implemented it. Currently,