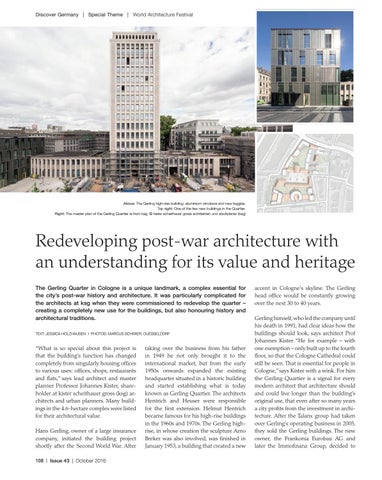 Above: The Gerling high-rise building: aluminium windows and new loggias. Top right: One of the few new buildings in the Quartier. Right: The master plan of the Gerling Quartier is from ksg. © kister scheithauer gross architekten und stadtplaner (ksg)

Redeveloping post-war architecture with an understanding for its value and heritage The Gerling Quarter in Cologne is a unique landmark, a complex essential for the city’s post-war history and architecture. It was particularly complicated for the architects at ksg when they were commissioned to redevelop the quarter – creating a completely new use for the buildings, but also honouring history and architectural traditions. TEXT: JESSICA HOLZHAUSEN I PHOTOS: MARCUS SCHWIER, DUESSELDORF

“What is so special about this project is that the building’s function has changed completely from singularly housing offices to various uses: offices, shops, restaurants and flats,” says lead architect and master planner Professor Johannes Kister, shareholder at kister scheithauer gross (ksg) architects and urban planners. Many buildings in the 4.6-hectare complex were listed for their architectural value. Hans Gerling, owner of a large insurance company, initiated the building project shortly after the Second World War. After 108 | Issue 43 | October 2016

taking over the business from his father in 1949 he not only brought it to the international market, but from the early 1950s onwards expanded the existing headquarter situated in a historic building and started establishing what is today known as Gerling Quartier. The architects Hentrich and Heuser were responsible for the first extension. Helmut Hentrich became famous for his high-rise buildings in the 1960s and 1970s. The Gerling highrise, in whose creation the sculpture Arno Breker was also involved, was finished in January 1953, a building that created a new

accent in Cologne’s skyline. The Gerling head office would be constantly growing over the next 30 to 40 years. Gerling himself, who led the company until his death in 1991, had clear ideas how the buildings should look, says architect Prof Johannes Kister. “He for example – with one exemption – only built up to the fourth floor, so that the Cologne Cathedral could still be seen. That is essential for people in Cologne,” says Kister with a wink. For him the Gerling Quartier is a signal for every modern architect that architecture should and could live longer than the building’s original use, that even after so many years a city profits from the investment in architecture. After the Talanx group had taken over Gerling’s operating business in 2005, they sold the Gerling buildings. The new owner, the Frankonia Eurobau AG and later the Immofinanz Group, decided to