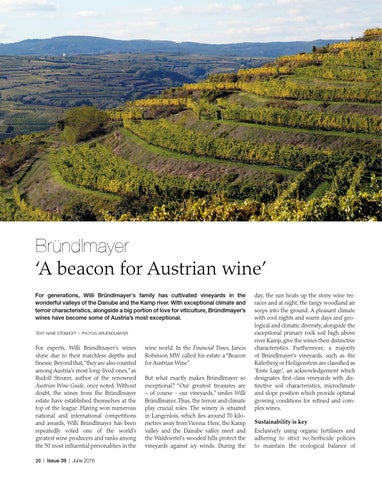 Bründlmayer ‘A beacon for Austrian wine’ For generations, Willi Bründlmayer‘s family has cultivated vineyards in the wonderful valleys of the Danube and the Kamp river. With exceptional climate and terroir characteristics, alongside a big portion of love for viticulture, Bründlmayer’s wines have become some of Austria’s most exceptional. TEXT: NANE STEINHOFF I PHOTOS: BRUENDLMAYER

For experts, Willi Bründlmayer’s wines shine due to their matchless depths and finesse. Beyond that,“they are also counted among Austria’s most long-lived ones,” as Rudolf Steurer, author of the renowned Austrian Wine Guide, once noted. Without doubt, the wines from the Bründlmayer estate have established themselves at the top of the league. Having won numerous national and international competitions and awards, Willi Bründlmayer has been repeatedly voted one of the world’s greatest wine producers and ranks among the 50 most influential personalities in the 20 | Issue 39 | June 2016

wine world. In the Financial Times, Jancis Robinson MW called his estate a “Beacon for Austrian Wine”. But what exactly makes Bründlmayer so exceptional? “Our greatest treasures are – of course - our vineyards,” smiles Willi Bründlmayer. Thus, the terroir and climate play crucial roles. The winery is situated in Langenlois, which lies around 70 kilometres away from Vienna. Here, the Kamp valley and the Danube valley meet and the Waldviertel’s wooded hills protect the vineyards against icy winds. During the

day, the sun heats up the stony wine terraces and at night, the tangy woodland air seeps into the ground. A pleasant climate with cool nights and warm days and geological and climatic diversity, alongside the exceptional primary rock soil high above river Kamp, give the wines their distinctive characteristics. Furthermore, a majority of Bründlmayer’s vineyards, such as the Käferberg or Heiligenstein are classified as ‘Erste Lage’, an acknowledgement which designates first-class vineyards with distinctive soil characteristics, microclimate and slope position which provide optimal growing conditions for refined and complex wines. Sustainability is key Exclusively using organic fertilisers and adhering to strict no-herbicide policies to maintain the ecological balance of