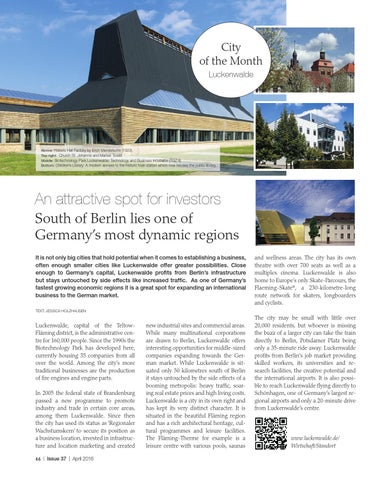 City of the Month Luckenwalde

An attractive spot for investors South of Berlin lies one of Germany’s most dynamic regions It is not only big cities that hold potential when it comes to establishing a business, often enough smaller cities like Luckenwalde offer greater possibilities. Close enough to Germany’s capital, Luckenwalde profits from Berlin’s infrastructure but stays untouched by side effects like increased traffic. As one of Germany’s fastest growing economic regions it is a great spot for expanding an international business to the German market.

and wellness areas. The city has its own theatre with over 700 seats as well as a multiplex cinema. Luckenwalde is also home to Europe’s only Skate-Parcours, the Flaeming-Skate®, a 230-kilometre-long route network for skaters, longboarders and cyclists.

Luckenwalde, capital of the TeltowFläming district, is the administrative centre for 160,000 people. Since the 1990s the Biotechnology Park has developed here, currently housing 35 companies from all over the world. Among the city’s more traditional businesses are the production of fire engines and engine parts. In 2005 the federal state of Brandenburg passed a new programme to promote industry and trade in certain core areas, among them Luckenwalde. Since then the city has used its status as ‘Regionaler Wachstumskern’ to secure its position as a business location, invested in infrastructure and location marketing and created 66 | Issue 37 | April 2016

new industrial sites and commercial areas. While many multinational corporations are drawn to Berlin, Luckenwalde offers interesting opportunities for middle-sized companies expanding towards the German market. While Luckenwalde is situated only 50 kilometres south of Berlin it stays untouched by the side effects of a booming metropolis: heavy traffic, soaring real estate prices and high living costs. Luckenwalde is a city in its own right and has kept its very distinct character. It is situated in the beautiful Fläming region and has a rich architectural heritage, cultural programmes and leisure facilities. The Fläming-Therme for example is a leisure centre with various pools, saunas

The city may be small with little over 20,000 residents, but whoever is missing the buzz of a larger city can take the train directly to Berlin, Potsdamer Platz being only a 35-minute ride away. Luckenwalde profits from Berlin’s job market providing skilled workers, its universities and research facilities, the creative potential and the international airports. It is also possible to reach Luckenwalde flying directly to Schönhagen, one of Germany’s largest regional airports and only a 20-minute drive from Luckenwalde’s centre.