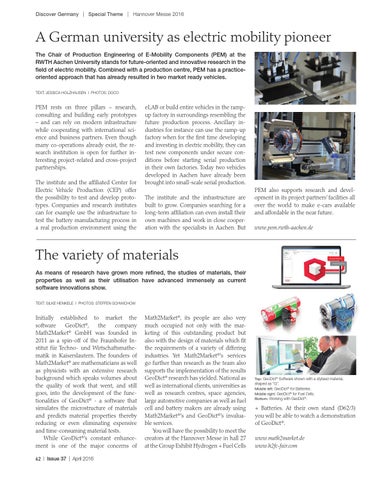 A German university as electric mobility pioneer The Chair of Production Engineering of E-Mobility Components (PEM) at the RWTH Aachen University stands for future-oriented and innovative research in the field of electric mobility. Combined with a production centre, PEM has a practiceoriented approach that has already resulted in two market ready vehicles. TEXT: JESSICA HOLZHAUSEN I PHOTOS: DOCO

PEM rests on three pillars – research, consulting and building early prototypes – and can rely on modern infrastructure while cooperating with international science and business partners. Even though many co-operations already exist, the research institution is open for further interesting project-related and cross-project partnerships. The institute and the affiliated Center for Electric Vehicle Production (CEP) offer the possibility to test and develop prototypes. Companies and research institutes can for example use the infrastructure to test the battery manufacturing process in a real production environment using the

eLAB or build entire vehicles in the rampup factory in surroundings resembling the future production process. Ancillary industries for instance can use the ramp-up factory when for the first time developing and investing in electric mobility, they can test new components under secure conditions before starting serial production in their own factories. Today two vehicles developed in Aachen have already been brought into small-scale serial production. The institute and the infrastructure are built to grow. Companies searching for a long-term affiliation can even install their own machines and work in close cooperation with the specialists in Aachen. But

PEM also supports research and development in its project partners’ facilities all over the world to make e-cars available and affordable in the near future. www.pem.rwth-aachen.de

The variety of materials As means of research have grown more refined, the studies of materials, their properties as well as their utilisation have advanced immensely as current software innovations show. TEXT: SILKE HENKELE I PHOTOS: STEFFEN SCHWICHOW

Initially established to market the software GeoDict®, the company Math2Market® GmbH was founded in 2011 as a spin-off of the Fraunhofer Institut für Techno- und Wirtschaftsmathematik in Kaiserslautern. The founders of Math2Market® are mathematicians as well as physicists with an extensive research background which speaks volumes about the quality of work that went, and still goes, into the development of the functionalities of GeoDict® - a software that simulates the microstructure of materials and predicts material properties thereby reducing or even eliminating expensive and time-consuming material tests. While GeoDict®’s constant enhancement is one of the major concerns of 62 | Issue 37 | April 2016

Math2Market®, its people are also very much occupied not only with the marketing of this outstanding product but also with the design of materials which fit the requirements of a variety of differing industries. Yet Math2Market®’s services go further than research as the team also supports the implementation of the results GeoDict® research has yielded. National as well as international clients, universities as well as research centres, space agencies, large automotive companies as well as fuel cell and battery makers are already using Math2Market®’s and GeoDict®’s invaluable services. You will have the possibility to meet the creators at the Hannover Messe in hall 27 at the Group Exhibit Hydrogen + Fuel Cells

+ Batteries. At their own stand (D62/3) you will be able to watch a demonstration of GeoDict®. www.math2market.de www.h2fc-fair.com