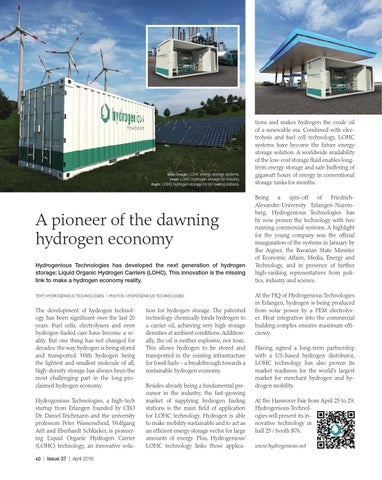 The development of hydrogen technology has been significant over the last 20 years. Fuel cells, electrolysers and even hydrogen-fueled cars have become a reality. But one thing has not changed for decades: the way hydrogen is being stored and transported. With hydrogen being the lightest and smallest molecule of all, high-density storage has always been the most challenging part in the long-proclaimed hydrogen economy. Hydrogenious Technologies, a high-tech startup from Erlangen founded by CEO Dr. Daniel Teichmann and the university professors Peter Wasserscheid, Wolfgang Arlt and Eberhardt Schlücker, is pioneering Liquid Organic Hydrogen Carrier (LOHC) technology, an innovative solu60 | Issue 37 | April 2016

tion for hydrogen storage. The patented technology chemically binds hydrogen to a carrier oil, achieving very high storage densities at ambient conditions. Additionally, the oil is neither explosive, nor toxic. This allows hydrogen to be stored and transported in the existing infrastructure for fossil fuels – a breakthrough towards a sustainable hydrogen economy. Besides already being a fundamental precursor in the industry, the fast-growing market of supplying hydrogen fueling stations is the main field of application for LOHC technology. Hydrogen is able to make mobility sustainable and to act as an efficient energy storage vector for large amounts of energy. Plus, Hydrogenious’ LOHC technology links those applica-

tions and makes hydrogen the crude oil of a renewable era. Combined with electrolysis and fuel cell technology, LOHC systems have become the future energy storage solution. A worldwide availability of the low-cost storage fluid enables longterm energy storage and safe buffering of gigawatt hours of energy in conventional storage tanks for months. Being a spin-off of FriedrichAlexander-University Erlangen-Nuremberg, Hydrogenious Technologies has by now proven the technology with two running commercial systems. A highlight for the young company was the official inauguration of the systems in January by Ilse Aigner, the Bavarian State Minister of Economic Affairs, Media, Energy and Technology, and in presence of further high-ranking representatives from politics, industry and science. At the HQ of Hydrogenious Technologies in Erlangen, hydrogen is being produced from solar power by a PEM electrolyser. Heat integration into the commercial building complex ensures maximum efficiency. Having signed a long-term partnership with a US-based hydrogen distributor, LOHC technology has also proven its market readiness for the world’s largest market for merchant hydrogen and hydrogen mobility. At the Hannover Fair from April 25 to 29, Hydrogenious Technologies will present its innovative technology in hall 25 / booth B76. www.hydrogenious.net