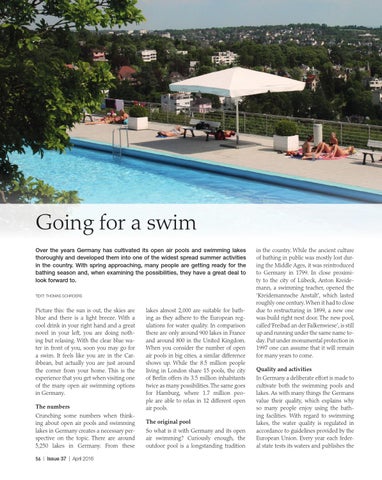 Going for a swim Over the years Germany has cultivated its open air pools and swimming lakes thoroughly and developed them into one of the widest spread summer activities in the country. With spring approaching, many people are getting ready for the bathing season and, when examining the possibilities, they have a great deal to look forward to. TEXT: THOMAS SCHROERS

Picture this: the sun is out, the skies are blue and there is a light breeze. With a cool drink in your right hand and a great novel in your left, you are doing nothing but relaxing. With the clear blue water in front of you, soon you may go for a swim. It feels like you are in the Caribbean, but actually you are just around the corner from your home. This is the experience that you get when visiting one of the many open air swimming options in Germany. The numbers Crunching some numbers when thinking about open air pools and swimming lakes in Germany creates a necessary perspective on the topic. There are around 5,250 lakes in Germany. From these 56 | Issue 37 | April 2016

lakes almost 2,000 are suitable for bathing as they adhere to the European regulations for water quality. In comparison there are only around 900 lakes in France and around 800 in the United Kingdom. When you consider the number of open air pools in big cities, a similar difference shows up. While the 8.5 million people living in London share 15 pools, the city of Berlin offers its 3.5 million inhabitants twice as many possibilities. The same goes for Hamburg, where 1.7 million people are able to relax in 12 different open air pools. The original pool So what is it with Germany and its open air swimming? Curiously enough, the outdoor pool is a longstanding tradition

in the country. While the ancient culture of bathing in public was mostly lost during the Middle Ages, it was reintroduced to Germany in 1799. In close proximity to the city of Lübeck, Anton Kreidemann, a swimming teacher, opened the ‘Kreidemannsche Anstalt’, which lasted roughly one century. When it had to close due to restructuring in 1899, a new one was build right next door. The new pool, called ‘Freibad an der Falkenwiese’, is still up and running under the same name today. Put under monumental protection in 1997 one can assume that it will remain for many years to come. Quality and activities In Germany a deliberate effort is made to cultivate both the swimming pools and lakes. As with many things the Germans value their quality, which explains why so many people enjoy using the bathing facilities. With regard to swimming lakes, the water quality is regulated in accordance to guidelines provided by the European Union. Every year each federal state tests its waters and publishes the