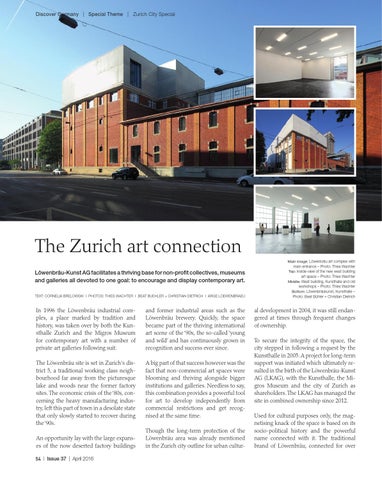 The Zurich art connection Löwenbräu-Kunst AG facilitates a thriving base for non-profit collectives, museums and galleries all devoted to one goal: to encourage and display contemporary art. TEXT: CORNELIA BRELOWSKI I PHOTOS: THIES WACHTER I BEAT BUEHLER + CHRISTIAN DIETRICH I ARGE LOEWENBRAEU

In 1996 the Löwenbräu industrial complex, a place marked by tradition and history, was taken over by both the Kunsthalle Zurich and the Migros Museum for contemporary art with a number of private art galleries following suit.

and former industrial areas such as the Löwenbräu brewery. Quickly, the space became part of the thriving international art scene of the ‘90s, the so-called ‘young and wild’ and has continuously grown in recognition and success ever since.

The Löwenbräu site is set in Zurich&#39;s district 5, a traditional working class neighbourhood far away from the picturesque lake and woods near the former factory sites. The economic crisis of the ‘80s, concerning the heavy manufacturing industry, left this part of town in a desolate state that only slowly started to recover during the ‘90s.

A big part of that success however was the fact that non-commercial art spaces were blooming and thriving alongside bigger institutions and galleries. Needless to say, this combination provides a powerful tool for art to develop independently from commercial restrictions and get recognised at the same time.

al development in 2004, it was still endangered at times through frequent changes of ownership. To secure the integrity of the space, the city stepped in following a request by the Kunsthalle in 2005. A project for long-term support was initiated which ultimately resulted in the birth of the Löwenbräu-Kunst AG (LKAG), with the Kunsthalle, the Migros Museum and the city of Zurich as shareholders. The LKAG has managed the site in combined ownership since 2012. Used for cultural purposes only, the magnetising knack of the space is based on its socio-political history and the powerful name connected with it. The traditional brand of Löwenbräu, connected for over