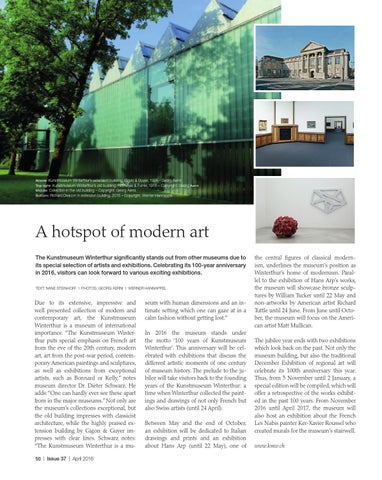 A hotspot of modern art The Kunstmuseum Winterthur significantly stands out from other museums due to its special selection of artists and exhibitions. Celebrating its 100-year anniversary in 2016, visitors can look forward to various exciting exhibitions. TEXT: NANE STEINHOFF I PHOTOS: GEORG AERNI I WERNER HANNAPPEL

Due to its extensive, impressive and well presented collection of modern and contemporary art, the Kunstmuseum Winterthur is a museum of international importance. “The Kunstmuseum Winterthur puts special emphasis on French art from the eve of the 20th century, modern art, art from the post-war period, contemporary American paintings and sculptures, as well as exhibitions from exceptional artists, such as Bonnard or Kelly,” notes museum director Dr. Dieter Schwarz. He adds: “One can hardly ever see these apart from in the major museums.” Not only are the museum’s collections exceptional, but the old building impresses with classicist architecture, while the highly praised extension building by Gigon & Guyer impresses with clear lines. Schwarz notes: “The Kunstmuseum Winterthur is a mu50 | Issue 37 | April 2016

seum with human dimensions and an intimate setting which one can gaze at in a calm fashion without getting lost.” In 2016 the museum stands under the motto ‘100 years of Kunstmuseum Winterthur’. This anniversary will be celebrated with exhibitions that discuss the different artistic moments of one century of museum history. The prelude to the jubilee will take visitors back to the founding years of the Kunstmuseum Winterthur: a time when Winterthur collected the paintings and drawings of not only French but also Swiss artists (until 24 April). Between May and the end of October, an exhibition will be dedicated to Italian drawings and prints and an exhibition about Hans Arp (until 22 May), one of

the central figures of classical modernism, underlines the museum’s position as Winterthur’s home of modernism. Parallel to the exhibition of Hans Arp’s works, the museum will showcase bronze sculptures by William Tucker until 22 May and non-artworks by American artist Richard Tuttle until 24 June. From June until October, the museum will focus on the American artist Matt Mullican. The jubilee year ends with two exhibitions which look back on the past. Not only the museum building, but also the traditional December Exhibition of regional art will celebrate its 100th anniversary this year. Thus, from 5 November until 2 January, a special edition will be compiled, which will offer a retrospective of the works exhibited in the past 100 years. From November 2016 until April 2017, the museum will also host an exhibition about the French Les Nabis painter Ker-Xavier Roussel who created murals for the museum’s stairwell. www.kmw.ch