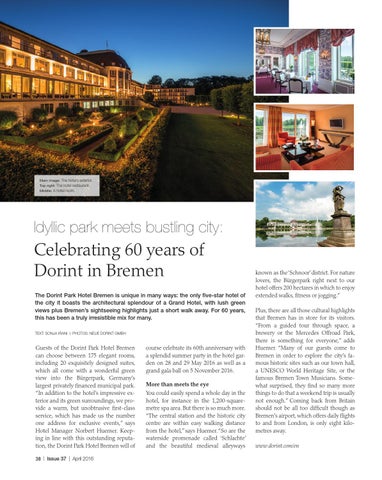 Celebrating 60 years of Dorint in Bremen The Dorint Park Hotel Bremen is unique in many ways: the only five-star hotel of the city it boasts the architectural splendour of a Grand Hotel, with lush green views plus Bremen’s sightseeing highlights just a short walk away. For 60 years, this has been a truly irresistible mix for many. TEXT: SONJA IRANI I PHOTOS: NEUE DORINT GMBH

Guests of the Dorint Park Hotel Bremen can choose between 175 elegant rooms, including 20 exquisitely designed suites, which all come with a wonderful green view into the Bürgerpark, Germany’s largest privately financed municipal park. “In addition to the hotel’s impressive exterior and its green surroundings, we provide a warm, but unobtrusive first-class service, which has made us the number one address for exclusive events,” says Hotel Manager Norbert Huemer. Keeping in line with this outstanding reputation, the Dorint Park Hotel Bremen will of 38 | Issue 37 | April 2016

course celebrate its 60th anniversary with a splendid summer party in the hotel garden on 28 and 29 May 2016 as well as a grand gala ball on 5 November 2016. More than meets the eye You could easily spend a whole day in the hotel, for instance in the 1,200-squaremetre spa area. But there is so much more. “The central station and the historic city centre are within easy walking distance from the hotel,” says Huemer. “So are the waterside promenade called ‘Schlachte’ and the beautiful medieval alleyways

known as the ‘Schnoor’ district. For nature lovers, the Bürgerpark right next to our hotel offers 200 hectares in which to enjoy extended walks, fitness or jogging.” Plus, there are all those cultural highlights that Bremen has in store for its visitors. “From a guided tour through space, a brewery or the Mercedes Offroad Park, there is something for everyone,” adds Huemer. “Many of our guests come to Bremen in order to explore the city’s famous historic sites such as our town hall, a UNESCO World Heritage Site, or the famous Bremen Town Musicians. Somewhat surprised, they find so many more things to do that a weekend trip is usually not enough.” Coming back from Britain should not be all too difficult though as Bremen’s airport, which offers daily flights to and from London, is only eight kilometres away. www.dorint.com/en