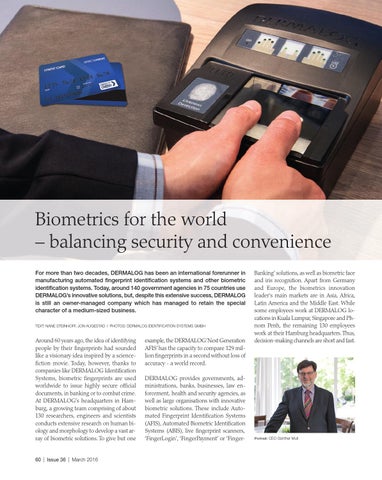 Biometrics for the world – balancing security and convenience For more than two decades, DERMALOG has been an international forerunner in manufacturing automated fingerprint identification systems and other biometric identification systems. Today, around 140 government agencies in 75 countries use DERMALOG’s innovative solutions, but, despite this extensive success, DERMALOG is still an owner-managed company which has managed to retain the special character of a medium-sized business. TEXT: NANE STEINHOFF, JON AUGESTAD I PHOTOS: DERMALOG IDENTIFICATION SYSTEMS GMBH

Around 60 years ago, the idea of identifying people by their fingerprints had sounded like a visionary idea inspired by a sciencefiction movie. Today, however, thanks to companies like DERMALOG Identification Systems, biometric fingerprints are used worldwide to issue highly secure official documents, in banking or to combat crime. At DERMALOG’s headquarters in Hamburg, a growing team comprising of about 130 researchers, engineers and scientists conducts extensive research on human biology and morphology to develop a vast array of biometric solutions. To give but one

Banking’ solutions, as well as biometric face and iris recognition. Apart from Germany and Europe, the biometrics innovation leader's main markets are in Asia, Africa, Latin America and the Middle East. While some employees work at DERMALOG locations in Kuala Lumpur, Singapore and Phnom Penh, the remaining 130 employees work at their Hamburg headquarters. Thus, decision-making channels are short and fast.