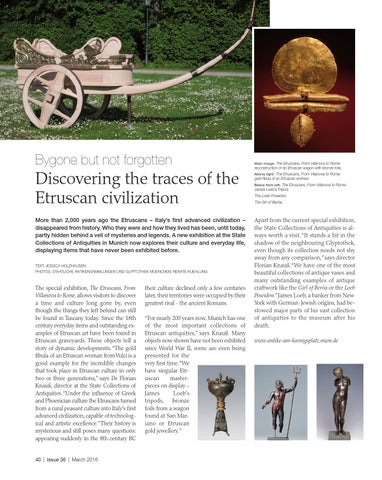 Bygone but not forgotten

Main image: The Etruscans, From Villanova to Rome: reconstruction of an Etruscan wagon with bronze foils.

Discovering the traces of the Etruscan civilization

Above right: The Etruscans, From Villanova to Rome: gold fibula of an Etruscan woman.

More than 2,000 years ago the Etruscans – Italy’s first advanced civilization – disappeared from history. Who they were and how they lived has been, until today, partly hidden behind a veil of mysteries and legends. A new exhibition at the State Collections of Antiquities in Munich now explores their culture and everyday life, displaying items that have never been exhibited before.

Apart from the current special exhibition, the State Collections of Antiquities is always worth a visit.“It stands a bit in the shadow of the neighbouring Glyptothek, even though its collection needs not shy away from any comparison,”says director Florian Knauß.“We have one of the most beautiful collections of antique vases and many outstanding examples of antique craftwork like the Girl of Beröa or the Loeb Poseidon.”James Loeb, a banker from New York with German-Jewish origins, had bestowed major parts of his vast collection of antiquities to the museum after his death.

The special exhibition, The Etruscans, From Villanova to Rome, allows visitors to discover a time and culture long gone by, even though the things they left behind can still be found in Tuscany today. Since the 18th century everyday items and outstanding examples of Etruscan art have been found in Etruscan graveyards. These objects tell a story of dynamic developments.“The gold fibula of an Etruscan woman from Vulci is a good example for the incredible changes that took place in Etruscan culture in only two or three generations,” says Dr Florian Knauß, director at the State Collections of Antiquities.“Under the influence of Greek and Phoenician culture the Etruscans turned from a rural peasant culture into Italy’s first advanced civilization, capable of technological and artistic excellence.”Their history is mysterious and still poses many questions: appearing suddenly in the 8th century BC

their culture declined only a few centuries later, their territories were occupied by their greatest rival - the ancient Romans. “For nearly 200 years now, Munich has one of the most important collections of Etruscan antiquities,” says Knauß. Many objects now shown have not been exhibited since World War II, some are even being presented for the very first time.“We have singular Etruscan masterpieces on display – James Loeb’s tripods, bronze foils from a wagon found at San Mariano or Etruscan gold jewellery.”

Below from left: The Etruscans, From Villanova to Rome: James Loeb’s Tripod.

The Loeb Poseidon. The Girl of Beröa.