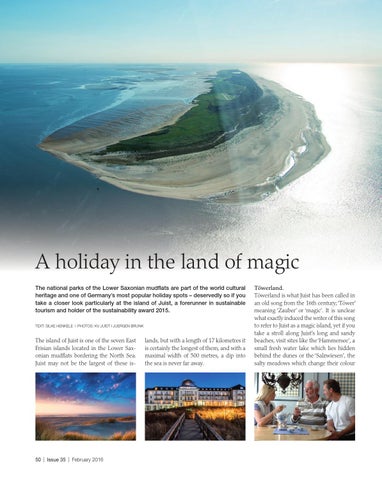 A holiday in the land of magic The national parks of the Lower Saxonian mudflats are part of the world cultural heritage and one of Germany’s most popular holiday spots – deservedly so if you take a closer look particularly at the island of Juist, a forerunner in sustainable tourism and holder of the sustainability award 2015. TEXT: SILKE HENKELE | PHOTOS: KV JUIST I JUERGEN BRUNK

The island of Juist is one of the seven East Frisian islands located in the Lower Saxonian mudflats bordering the North Sea. Juist may not be the largest of these is-

lands, but with a length of 17 kilometres it is certainly the longest of them, and with a maximal width of 500 metres, a dip into the sea is never far away.

Töwerland. Töwerland is what Juist has been called in an old song from the 16th century; ‘Töwer’ meaning ‘Zauber’ or ‘magic’. It is unclear what exactly induced the writer of this song to refer to Juist as a magic island, yet if you take a stroll along Juist’s long and sandy beaches, visit sites like the ‘Hammersee’, a small fresh water lake which lies hidden behind the dunes or the ‘Salzwiesen’, the salty meadows which change their colour