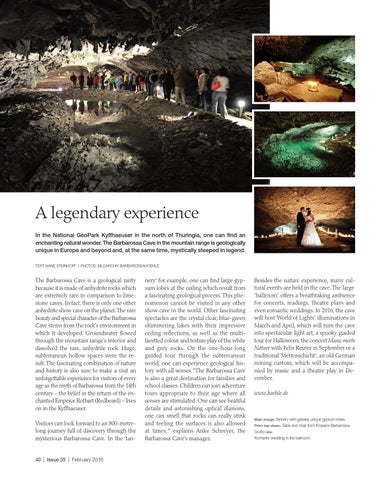 A legendary experience In the National GeoPark Kyffhaeuser in the north of Thuringia, one can find an enchanting natural wonder. The Barbarossa Cave in the mountain range is geologically unique in Europe and beyond and, at the same time, mystically steeped in legend. TEXT: NANE STEINHOFF I PHOTOS: BILDARCHIV BARBAROSSAHOEHLE

The Barbarossa Cave is a geological rarity because it is made of anhydrite rocks which are extremely rare in comparison to limestone caves. In fact, there is only one other anhydrite show cave on the planet.The rare beauty and special character of the Barbarossa Cave stems from the rock’s environment in which it developed. Groundwater flowed through the mountain range’s interior and dissolved the rare, anhydrite rock. Huge, subterranean hollow spaces were the result. The fascinating combination of nature and history is also sure to make a visit an unforgettable experience for visitors of every age as the myth of Barbarossa from the 14th century – the belief in the return of the enchanted Emperor Rotbart (Redbeard) – lives on in the Kyffhaeuser. Visitors can look forward to an 800-metrelong journey full of discovery through the mysterious Barbarossa Cave. In the ‘tan-

nery‘ for example, one can find large gypsum lobes at the ceiling which result from a fascinating geological process. This phenomenon cannot be visited in any other show cave in the world. Other fascinating spectacles are the crystal clear, blue-green shimmering lakes with their impressive ceiling reflections, as well as the multifacetted colour and texture play of the white and grey rocks. On the one-hour-long guided tour through the subterranean world, one can experience geological history with all senses.“The Barbarossa Cave is also a great destination for families and school classes. Children can join adventure tours appropriate to their age where all senses are stimulated. One can see beatiful details and astonishing optical illusions, one can smell that rocks can really stink and feeling the surfaces is also allowed at times,“ explains Anke Schreyer, the Barbarossa Cave’s manager.

Besides the nature experience, many cultural events are held in the cave. The large ‘ballroom‘ offers a breathtaking ambience for concerts, readings, theatre plays and even romantic weddings. In 2016, the cave will host ‘World of Lights‘ illuminations in March and April, which will turn the cave into spectacular light art, a spooky guided tour for Halloween, the concert Music meets Nature with Felix Reuter in September or a traditional‘Mettenschicht‘, an old German mining custom, which will be accompanied by music and a theatre play in December. www.hoehle.de