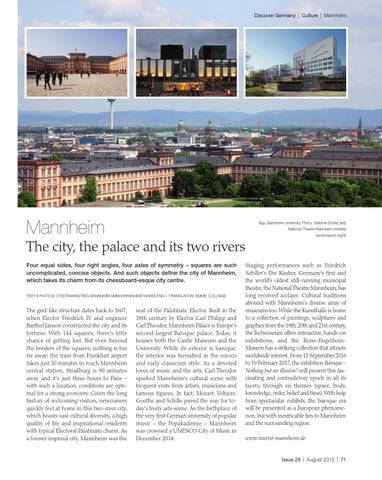 The grid-like structure dates back to 1607, when Elector Friedrich IV and engineer Barthel Janson constructed the city and its fortress. With 144 squares, there’s little chance of getting lost. But even beyond the borders of the squares, nothing is too far away; the train from Frankfurt airport takes just 30 minutes to reach Mannheim central station, Straßburg is 90 minutes away and it’s just three hours to Paris – with such a location, conditions are optimal for a strong economy. Given the long history of welcoming visitors, newcomers quickly feel at home in this two-river city, which boasts vast cultural diversity, a high quality of life and inspirational residents with typical Electoral Palatinate charm. As a former imperial city, Mannheim was the

seat of the Palatinate Elector. Built in the 18th century by Elector Carl Philipp and Carl Theodor, Mannheim Palace is Europe’s second-largest Baroque palace. Today, it houses both the Castle Museum and the University. While its exterior is baroque, the interior was furnished in the rococo and early classicism style. As a devoted lover of music and the arts, Carl Theodor sparked Mannheim’s cultural scene with frequent visits from artists, musicians and famous figures. In fact, Mozart, Voltaire, Goethe and Schille paved the way for today’s lively arts scene. As the birthplace of the very first German university of popular music – the Popakademie – Mannheim was crowned a UNESCO City of Music in December 2014.

Staging performances such as Friedrich Schiller’s Die Räuber, Germany’s first and the world’s oldest still-running municipal theatre, the NationalTheatre Mannheim, has long received acclaim. Cultural traditions abound with Mannheim’s diverse array of museums too. While the Kunsthalle is home to a collection of paintings, sculptures and graphics from the 19th, 20th and 21st century, the Technoseum offers interactive, hands-on exhibitions, and the Reiss-EngelhornMuseen has a striking collection that attracts worldwide interest. From 11 September 2016 to 19 February 2017, the exhibition Baroque – Nothing but an illusion? will present this fascinating and contradictory epoch in all its facets, through six themes (space, body, knowledge, order, belief and time).With help from spectacular exhibits, the baroque era will be presented as a European phenomenon, but with inextricable ties to Mannheim and the surrounding region. www.tourist-mannheim.de