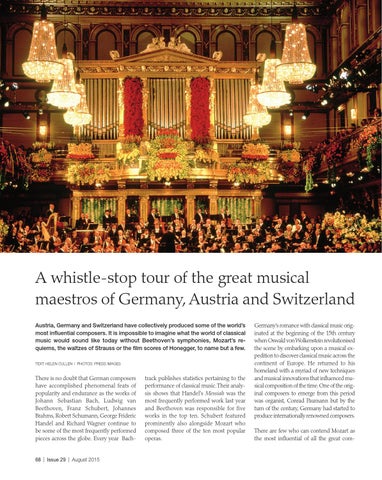 A whistle-stop tour of the great musical maestros of Germany, Austria and Switzerland Austria, Germany and Switzerland have collectively produced some of the world’s most influential composers. It is impossible to imagine what the world of classical music would sound like today without Beethoven’s symphonies, Mozart’s requiems, the waltzes of Strauss or the film scores of Honegger, to name but a few. TEXT: HELEN CULLEN | PHOTOS: PRESS IMAGES

There is no doubt that German composers have accomplished phenomenal feats of popularity and endurance as the works of Johann Sebastian Bach, Ludwig van Beethoven, Franz Schubert, Johannes Brahms, Robert Schumann, George Frideric Handel and Richard Wagner continue to be some of the most frequently performed pieces across the globe. Every year Bach-

track publishes statistics pertaining to the performance of classical music.Their analysis shows that Handel’s Messiah was the most frequently performed work last year and Beethoven was responsible for five works in the top ten. Schubert featured prominently also alongside Mozart who composed three of the ten most popular operas.

Germany’s romance with classical music originated at the beginning of the 15th century when Oswald von Wolkenstein revolutionised the scene by embarking upon a musical expedition to discover classical music across the continent of Europe. He returned to his homeland with a myriad of new techniques and musical innovations that influenced musical composition of the time. One of the original composers to emerge from this period was organist, Conrad Paumann but by the turn of the century, Germany had started to produce internationally renowned composers. There are few who can contend Mozart as the most influential of all the great com-