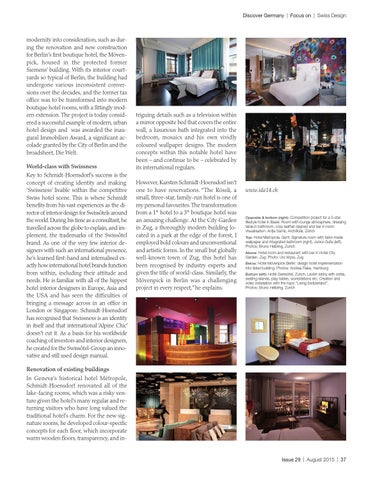 modernity into consideration, such as during the renovation and new construction for Berlin’s first boutique hotel, the Mövenpick, housed in the protected former Siemens’ building. With its interior courtyards so typical of Berlin, the building had undergone various inconsistent conversions over the decades, and the former tax office was to be transformed into modern boutique hotel rooms, with a fittingly modern extension. The project is today considered a successful example of modern, urban hotel design and was awarded the inaugural Immobilien Award, a significant accolade granted by the City of Berlin and the broadsheet, Die Welt. World-class with Swissness Key to Schmidt-Hoensdorf’s success is the concept of creating identity and making ‘Swissness’ livable within the competitive Swiss hotel scene. This is where Schmidt benefits from his vast experiences as the director of interior design for Swissôtels around the world. During his time as a consultant, he travelled across the globe to explain, and implement, the trademarks of the Swissôtel brand. As one of the very few interior designers with such an international presence, he’s learned first-hand and internalised exactly how international hotel brands function from within, including their attitude and needs. He is familiar with all of the hippest hotel interior designers in Europe, Asia and the USA and has seen the difficulties of bringing a message across in an office in London or Singapore. Schmidt-Hoensdorf has recognised that Swissness is an identity in itself and that international ‘Alpine Chic’ doesn’t cut it. As a basis for his worldwide coaching of investors and interior designers, he created for the Swissôtel-Group an innovative and still used design manual.

triguing details such as a television within a mirror opposite bed that covers the entire wall, a luxurious bath integrated into the bedroom, mosaics and his own vividly coloured wallpaper designs. The modern concepts within this notable hotel have been – and continue to be – celebrated by its international regulars. However, Karsten Schmidt-Hoensdorf isn’t one to have reservations. “The Rössli, a small, three-star, family-run hotel is one of my personal favourites.The transformation from a 1* hotel to a 3* boutique hotel was an amazing challenge. At the City Garden in Zug, a thoroughly modern building located in a park at the edge of the forest, I employed bold colours and unconventional and artistic forms. In the small but globally well-known town of Zug, this hotel has been recognised by industry experts and given the title of world-class. Similarly, the Mövenpick in Berlin was a challenging project in every respect,”he explains.

Renovation of existing buildings In Geneva’s historical hotel Métropole, Schmidt-Hoensdorf renovated all of the lake-facing rooms, which was a risky venture given the hotel’s many regular and returning visitors who have long valued the traditional hotel’s charm. For the new signature rooms, he developed colour-specific concepts for each floor, which incorporate warm wooden floors, transparency, and in-