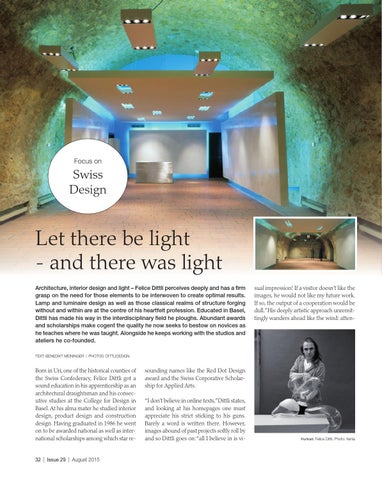 Let there be light - and there was light Architecture, interior design and light – Felice Dittli perceives deeply and has a firm grasp on the need for those elements to be interwoven to create optimal results. Lamp and luminaire design as well as those classical realms of structure forging without and within are at the centre of his heartfelt profession. Educated in Basel, Dittli has made his way in the interdisciplinary field he ploughs. Abundant awards and scholarships make cogent the quality he now seeks to bestow on novices as he teaches where he was taught. Alongside he keeps working with the studios and ateliers he co-founded.

sual impression! If a visitor doesn’t like the images, he would not like my future work. If so, the output of a cooperation would be dull.”His deeply artistic approach unremittingly wanders ahead like the wind: atten-

Born in Uri, one of the historical counties of the Swiss Confederacy, Felice Dittli got a sound education in his apprenticeship as an architectural draughtsman and his consecutive studies at the College for Design in Basel. At his alma mater he studied interior design, product design and construction design. Having graduated in 1986 he went on to be awarded national as well as international scholarships among which star re-

sounding names like the Red Dot Design award and the Swiss Corporative Scholarship for Applied Arts. “I don’t believe in online texts,”Dittli states, and looking at his homepages one must appreciate his strict sticking to his guns. Barely a word is written there. However, images abound of past projects softly roll by and so Dittli goes on:“all I believe in is vi-