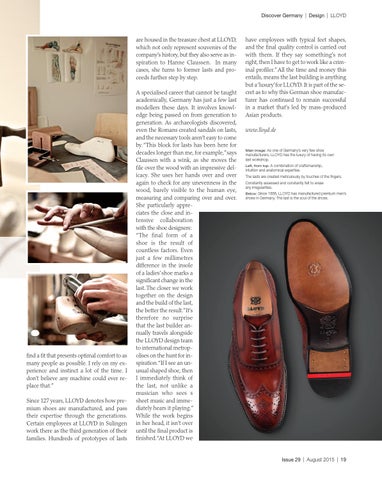 are housed in the treasure chest at LLOYD, which not only represent souvenirs of the company’s history, but they also serve as inspiration to Hanne Claussen. In many cases, she turns to former lasts and proceeds further step by step.

find a fit that presents optimal comfort to as many people as possible. I rely on my experience and instinct a lot of the time. I don’t believe any machine could ever replace that.” Since 127 years, LLOYD denotes how premium shoes are manufactured, and pass their expertise through the generations. Certain employees at LLOYD in Sulingen work there as the third generation of their families. Hundreds of prototypes of lasts

A specialised career that cannot be taught academically, Germany has just a few last modellers these days. It involves knowledge being passed on from generation to generation. As archaeologists discovered, even the Romans created sandals on lasts, and the necessary tools aren’t easy to come by.“This block for lasts has been here for decades longer than me, for example,”says Claussen with a wink, as she moves the file over the wood with an impressive delicacy. She uses her hands over and over again to check for any unevenness in the wood, barely visible to the human eye, measuring and comparing over and over. She particularly appreciates the close and intensive collaboration with the shoe designers: “The final form of a shoe is the result of countless factors. Even just a few millimetres difference in the insole of a ladies’shoe marks a significant change in the last. The closer we work together on the design and the build of the last, the better the result.”It’s therefore no surprise that the last builder annually travels alongside the LLOYD design team to international metropolises on the hunt for inspiration.“If I see an unusual shaped shoe, then I immediately think of the last, not unlike a musician who sees s sheet music and immediately hears it playing.” While the work begins in her head, it isn’t over until the final product is finished.“At LLOYD we

have employees with typical feet shapes, and the final quality control is carried out with them. If they say something’s not right, then I have to get to work like a criminal profiler.”All the time and money this entails, means the last building is anything but a‘luxury’for LLOYD. It is part of the secret as to why this German shoe manufacturer has continued to remain successful in a market that’s led by mass-produced Asian products. www.lloyd.de

Main image: As one of Germany’s very few shoe manufacturers, LLOYD has the luxury of having its own last workshop. Left, from top: A combination of craftsmanship, intuition and anatomical expertise. The lasts are created meticulously by touches of the fingers. Constantly assessed and constantly felt to erase any irregularities. Below: Since 1888, LLOYD has manufactured premium men’s shoes in Germany. The last is the soul of the shoes.