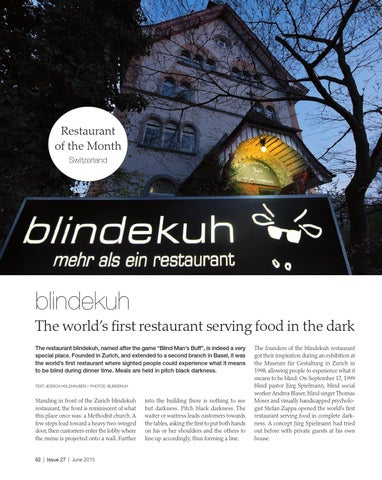 Restaurant of the Month Switzerland

blindekuh The world’s first restaurant serving food in the dark The restaurant blindekuh, named after the game “Blind Man's Buff”, is indeed a very special place. Founded in Zurich, and extended to a second branch in Basel, it was the world’s first restaurant where sighted people could experience what it means to be blind during dinner time. Meals are held in pitch black darkness. TEXT: JESSICA HOLZHAUSEN | PHOTOS: BLINDEKUH

Standing in front of the Zurich blindekuh restaurant, the front is reminiscent of what this place once was: a Methodist church. A few steps lead toward a heavy two-winged door, then customers enter the lobby where the menu is projected onto a wall. Further

into the building there is nothing to see but darkness. Pitch black darkness. The waiter or waitress leads customers towards the tables, asking the first to put both hands on his or her shoulders and the others to line up accordingly, thus forming a line.

The founders of the blindekuh restaurant got their inspiration during an exhibition at the Museum für Gestaltung in Zurich in 1998, allowing people to experience what it means to be blind: On September 17, 1999 blind pastor Jürg Spielmann, blind social worker Andrea Blaser, blind singer Thomas Moser and visually handicapped psychologist Stefan Zappa opened the world’s first restaurant serving food in complete darkness. A concept Jürg Spielmann had tried out before with private guests at his own house.