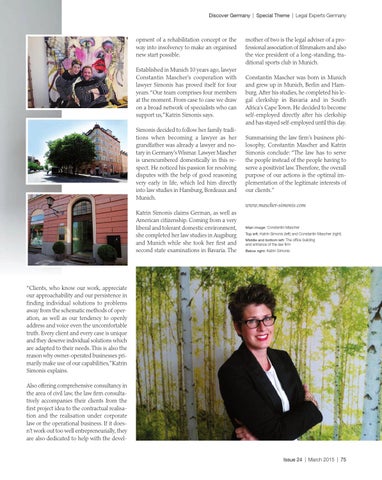 opment of a rehabilitation concept or the way into insolvency to make an organised new start possible. Established in Munich 10 years ago, lawyer Constantin Mascher’s cooperation with lawyer Simonis has proved itself for four years.“Our team comprises four members at the moment. From case to case we draw on a broad network of specialists who can support us,”Katrin Simonis says. Simonis decided to follow her family traditions when becoming a lawyer as her grandfather was already a lawyer and notary in Germany’s Wismar. Lawyer Mascher is unencumbered domestically in this respect. He noticed his passion for resolving disputes with the help of good reasoning very early in life, which led him directly into law studies in Hamburg, Bordeaux and Munich.

mother of two is the legal adviser of a professional association of filmmakers and also the vice president of a long-standing, traditional sports club in Munich. Constantin Mascher was born in Munich and grew up in Munich, Berlin and Hamburg. After his studies, he completed his legal clerkship in Bavaria and in South Africa’s Cape Town. He decided to become self-employed directly after his clerkship and has stayed self-employed until this day. Summarising the law firm’s business philosophy, Constantin Mascher and Katrin Simonis conclude: “The law has to serve the people instead of the people having to serve a positivist law. Therefore, the overall purpose of our actions is the optimal implementation of the legitimate interests of our clients.” www.mascher-simonis.com

Katrin Simonis claims German, as well as American citizenship. Coming from a very liberal and tolerant domestic environment, she completed her law studies in Augsburg and Munich while she took her first and second state examinations in Bavaria. The

“Clients, who know our work, appreciate our approachability and our persistence in finding individual solutions to problems away from the schematic methods of operation, as well as our tendency to openly address and voice even the uncomfortable truth. Every client and every case is unique and they deserve individual solutions which are adapted to their needs. This is also the reason why owner-operated businesses primarily make use of our capabilities,”Katrin Simonis explains. Also offering comprehensive consultancy in the area of civil law, the law firm consultatively accompanies their clients from the first project idea to the contractual realisation and the realisation under corporate law or the operational business. If it doesn’t work out too well entrepreneurially, they are also dedicated to help with the devel-