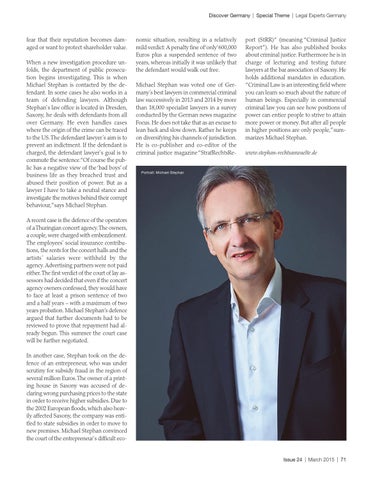 fear that their reputation becomes damaged or want to protect shareholder value. When a new investigation procedure unfolds, the department of public prosecution begins investigating. This is when Michael Stephan is contacted by the defendant. In some cases he also works in a team of defending lawyers. Although Stephan&#96;s law office is located in Dresden, Saxony, he deals with defendants from all over Germany. He even handles cases where the origin of the crime can be traced to the US. The defendant lawyer´s aim is to prevent an indictment. If the defendant is charged, the defendant lawyer&#96;s goal is to commute the sentence.“Of course the public has a negative view of the ‘bad boys’ of business life as they breached trust and abused their position of power. But as a lawyer I have to take a neutral stance and investigate the motives behind their corrupt behaviour,”says Michael Stephan.

nomic situation, resulting in a relatively mild verdict: A penalty fine of‘only’600,000 Euros plus a suspended sentence of two years, whereas initially it was unlikely that the defendant would walk out free. Michael Stephan was voted one of Germany´s best lawyers in commercial criminal law successively in 2013 and 2014 by more than 18,000 specialist lawyers in a survey conducted by the German news magazine Focus. He does not take that as an excuse to lean back and slow down. Rather he keeps on diversifying his channels of jurisdiction. He is co-publisher and co-editor of the criminal justice magazine “StrafRechtsRe-

port (StRR)“ (meaning “Criminal Justice Report”). He has also published books about criminal justice. Furthermore he is in charge of lecturing and testing future lawyers at the bar association of Saxony. He holds additional mandates in education. “Criminal Law is an interesting field where you can learn so much about the nature of human beings. Especially in commercial criminal law you can see how positions of power can entice people to strive to attain more power or money. But after all people in higher positions are only people,”summarizes Michael Stephan. www.stephan-rechtsanwaelte.de

A recent case is the defence of the operators of a Thuringian concert agency.The owners, a couple, were charged with embezzlement. The employees&#96; social insurance contributions, the rents for the concert halls and the artists´ salaries were withheld by the agency. Advertising partners were not paid either.The first verdict of the court of lay assessors had decided that even if the concert agency owners confessed, they would have to face at least a prison sentence of two and a half years – with a maximum of two years probation. Michael Stephan’s defence argued that further documents had to be reviewed to prove that repayment had already begun. This summer the court case will be further negotiated. In another case, Stephan took on the defence of an entrepreneur, who was under scrutiny for subsidy fraud in the region of several million Euros.The owner of a printing house in Saxony was accused of declaring wrong purchasing prices to the state in order to receive higher subsidies. Due to the 2002 European floods, which also heavily affected Saxony, the company was entitled to state subsidies in order to move to new premises. Michael Stephan convinced the court of the entrepreneur&#96;s difficult eco-