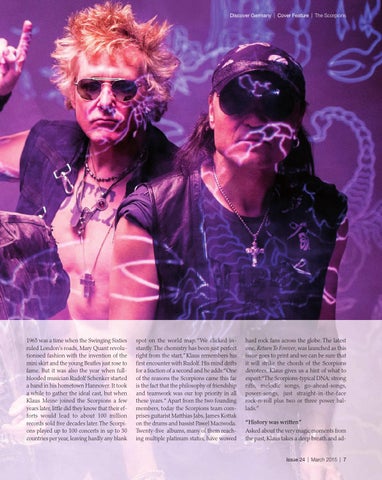 1965 was a time when the Swinging Sixties ruled London’s roads, Mary Quant revolutionised fashion with the invention of the mini skirt and the young Beatles just rose to fame. But it was also the year when fullblooded musician Rudolf Schenker started a band in his hometown Hannover. It took a while to gather the ideal cast, but when Klaus Meine joined the Scorpions a few years later, little did they know that their efforts would lead to about 100 million records sold five decades later. The Scorpions played up to 100 concerts in up to 30 countries per year, leaving hardly any blank

spot on the world map. “We clicked instantly. The chemistry has been just perfect right from the start,”Klaus remembers his first encounter with Rudolf. His mind drifts for a fraction of a second and he adds:“One of the reasons the Scorpions came this far is the fact that the philosophy of friendship and teamwork was our top priority in all these years.“ Apart from the two founding members, today the Scorpions team comprises guitarist Matthias Jabs, James Kottak on the drums and bassist Pawel Maciwoda. Twenty-five albums, many of them reaching multiple platinum status, have wowed

hard rock fans across the globe. The latest one, Return To Forever, was launched as this issue goes to print and we can be sure that it will strike the chords of the Scorpions devotees. Klaus gives us a hint of what to expect:“The Scorpions-typical DNA: strong riffs, melodic songs, go-ahead-songs, power-songs, just straight-in-the-face rock-n-roll plus two or three power ballads.” “History was written” Asked about the very magic moments from the past, Klaus takes a deep breath and ad-