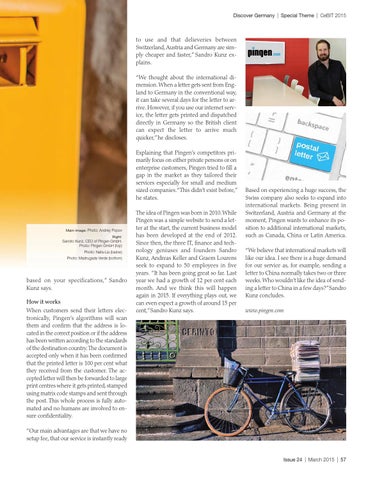 to use and that delieveries between Switzerland, Austria and Germany are simply cheaper and faster,” Sandro Kunz explains. “We thought about the international dimension. When a letter gets sent from England to Germany in the conventional way, it can take several days for the letter to arrive. However, if you use our internet service, the letter gets printed and dispatched directly in Germany so the British client can expect the letter to arrive much quicker,”he discloses. Explaining that Pingen’s competitors primarily focus on either private persons or on enterprise customers, Pingen tried to fill a gap in the market as they tailored their services especially for small and medium sized companies.“This didn’t exist before,” he states.

based on your specifications,” Sandro Kunz says. How it works When customers send their letters electronically, Pingen’s algorithms will scan them and confirm that the address is located in the correct position or if the address has been written according to the standards of the destination country.The document is accepted only when it has been confirmed that the printed letter is 100 per cent what they received from the customer. The accepted letter will then be forwarded to large print centres where it gets printed, stamped using matrix code stamps and sent through the post. This whole process is fully automated and no humans are involved to ensure confidentiality.

The idea of Pingen was born in 2010. While Pingen was a simple website to send a letter at the start, the current business model has been developed at the end of 2012. Since then, the three IT, finance and technology geniuses and founders Sandro Kunz, Andreas Keller and Graem Lourens seek to expand to 50 employees in five years. “It has been going great so far. Last year we had a growth of 12 per cent each month. And we think this will happen again in 2015. If everything plays out, we can even expect a growth of around 15 per cent,”Sandro Kunz says.

“Our main advantages are that we have no setup fee, that our service is instantly ready