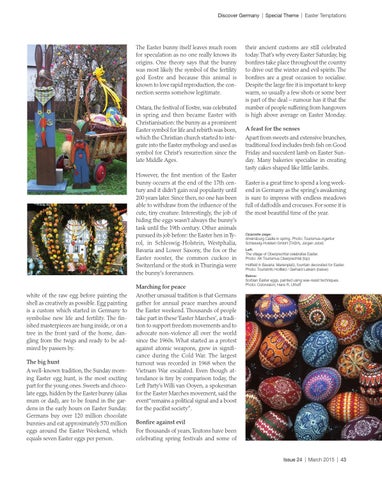 The Easter bunny itself leaves much room for speculation as no one really knows its origins. One theory says that the bunny was most likely the symbol of the fertility god Eostre and because this animal is known to love rapid reproduction, the connection seems somehow legitimate. Ostara, the festival of Eostre, was celebrated in spring and then became Easter with Christianisation: the bunny as a prominent Easter symbol for life and rebirth was born, which the Christian church started to integrate into the Easter mythology and used as symbol for Christ’s resurrection since the late Middle Ages. However, the first mention of the Easter bunny occurrs at the end of the 17th century and it didn’t gain real popularity until 200 years later. Since then, no one has been able to withdraw from the influence of the cute, tiny creature. Interestingly, the job of hiding the eggs wasn’t always the bunny’s task until the 19th century. Other animals pursued its job before: the Easter hen in Tyrol, in Schleswig-Holstein, Westphalia, Bavaria and Lower Saxony, the fox or the Easter rooster, the common cuckoo in Switzerland or the stork in Thuringia were the bunny’s forerunners. Marching for peace white of the raw egg before painting the shell as creatively as possible. Egg painting is a custom which started in Germany to symbolise new life and fertility. The finished masterpieces are hung inside, or on a tree in the front yard of the home, dangling from the twigs and ready to be admired by passers by. The big hunt A well-known tradition, the Sunday morning Easter egg hunt, is the most exciting part for the young ones. Sweets and chocolate eggs, hidden by the Easter bunny (alias mum or dad), are to be found in the gardens in the early hours on Easter Sunday. Germans buy over 120 million chocolate bunnies and eat approximately 570 million eggs around the Easter Weekend, which equals seven Easter eggs per person.

their ancient customs are still celebrated today.That’s why every Easter Saturday, big bonfires take place throughout the country to drive out the winter and evil spirits. The bonfires are a great occasion to socialise. Despite the large fire it is important to keep warm, so usually a few shots or some beer is part of the deal – rumour has it that the number of people suffering from hangovers is high above average on Easter Monday. A feast for the senses Apart from sweets and extensive brunches, traditional food includes fresh fish on Good Friday and succulent lamb on Easter Sunday. Many bakeries specialise in creating tasty cakes shaped like little lambs. Easter is a great time to spend a long weekend in Germany as the spring’s awakening is sure to impress with endless meadows full of daffodils and crocuses. For some it is the most beautiful time of the year.

Another unusual tradition is that Germans gather for annual peace marches around the Easter weekend. Thousands of people take part in these‘Easter Marches’, a tradition to support freedom movements and to advocate non-violence all over the world since the 1960s. What started as a protest against atomic weapons, grew in significance during the Cold War. The largest turnout was recorded in 1968 when the Vietnam War escalated. Even though attendance is tiny by comparison today, the Left Party’s Willi van Ooyen, a spokesman for the Easter Marches movement, said the event“remains a political signal and a boost for the pacifist society”. Bonfire against evil For thousands of years, Teutons have been celebrating spring festivals and some of