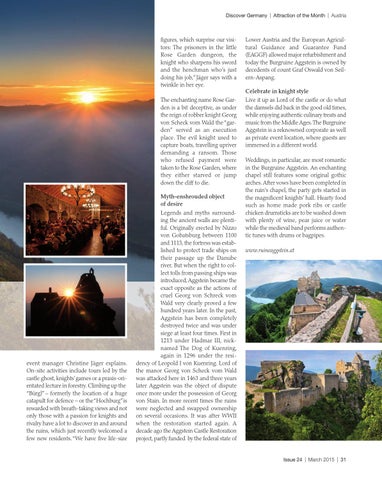 figures, which surprise our visitors: The prisoners in the little Rose Garden dungeon, the knight who sharpens his sword and the henchman who’s just doing his job,”Jäger says with a twinkle in her eye.

The enchanting name Rose Garden is a bit deceptive, as under the reign of robber knight Georg von Scheck vom Wald the “garden” served as an execution place. The evil knight used to capture boats, travelling upriver demanding a ransom. Those who refused payment were taken to the Rose Garden, where they either starved or jump down the cliff to die. Myth-enshrouded object of desire

event manager Christine Jäger explains. On-site activities include tours led by the castle ghost, knights’games or a praxis-orientated lecture in forestry. Climbing up the “Bürgl” – formerly the location of a huge catapult for defence – or the“Hochburg”is rewarded with breath-taking views and not only those with a passion for knights and rivalry have a lot to discover in and around the ruins, which just recently welcomed a few new residents.“We have five life-size

Legends and myths surrounding the ancient walls are plentiful. Originally erected by Nizzo von Gobatsburg between 1100 and 1113, the fortress was established to protect trade ships on their passage up the Danube river. But when the right to collect tolls from passing ships was introduced, Aggstein became the exact opposite as the actions of cruel Georg von Schreck vom Wald very clearly proved a few hundred years later. In the past, Aggstein has been completely destroyed twice and was under siege at least four times. First in 1213 under Hadmar III, nicknamed The Dog of Kuenring, again in 1296 under the residency of Leopold I von Kuenring. Lord of the manor Georg von Scheck vom Wald was attacked here in 1463 and three years later Aggstein was the object of dispute once more under the possession of Georg von Stain. In more recent times the ruins were neglected and swapped ownership on several occasions. It was after WWII when the restoration started again. A decade ago the Aggstein Castle Restoration project, partly funded by the federal state of

Live it up as Lord of the castle or do what the damsels did back in the good old times, while enjoying authentic culinary treats and music from the Middle Ages.The Burgruine Aggstein is a reknowned corporate as well as private event location, where guests are immersed in a different world. Weddings, in particular, are most romantic in the Burgruine Aggstein. An enchanting chapel still features some original gothic arches. After vows have been completed in the ruin’s chapel, the party gets started in the magnificent knights’ hall. Hearty food such as home made pork ribs or castle chicken drumsticks are to be washed down with plenty of wine, pear juice or water while the medieval band performs authentic tunes with drums or bagpipes. www.ruineaggstein.at