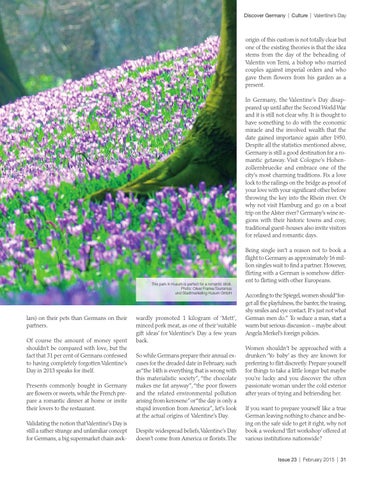 origin of this custom is not totally clear but one of the existing theories is that the idea stems from the day of the beheading of Valentin von Terni, a bishop who married couples against imperial orders and who gave them flowers from his garden as a present. In Germany, the Valentine’s Day disappeared up until after the Second World War and it is still not clear why. It is thought to have something to do with the economic miracle and the involved wealth that the date gained importance again after 1950. Despite all the statistics mentioned above, Germany is still a good destination for a romantic getaway. Visit Cologne’s Hohenzollernbruecke and embrace one of the city’s most charming traditions. Fix a love lock to the railings on the bridge as proof of your love with your significant other before throwing the key into the Rhein river. Or why not visit Hamburg and go on a boat trip on the Alster river? Germany’s wine regions with their historic towns and cosy, traditional guest-houses also invite visitors for relaxed and romantic days.

lars) on their pets than Germans on their partners. Of course the amount of money spent shouldn’t be compared with love, but the fact that 31 per cent of Germans confessed to having completely forgotten Valentine’s Day in 2013 speaks for itself. Presents commonly bought in Germany are flowers or sweets, while the French prepare a romantic dinner at home or invite their lovers to the restaurant. Validating the notion thatValentine’s Day is still a rather strange and unfamiliar concept for Germans, a big supermarket chain awk-

wardly promoted 1 kilogram of ‘Mett’, minced pork meat, as one of their‘suitable gift ideas’ for Valentine’s Day a few years back. So while Germans prepare their annual excuses for the dreaded date in February, such as“the 14th is everything that is wrong with this materialistic society”, “the chocolate makes me fat anyway”, “the poor flowers and the related environmental pollution arising from kerosene”or“the day is only a stupid invention from America”, let’s look at the actual origins of Valentine’s Day. Despite widespread beliefs,Valentine’s Day doesn’t come from America or florists. The

Being single isn’t a reason not to book a flight to Germany as approximately 16 million singles wait to find a partner. However, flirting with a German is somehow different to flirting with other Europeans. According to the Spiegel, women should“forget all the playfulness, the banter, the teasing, shy smiles and eye contact. It's just not what German men do.” To seduce a man, start a warm but serious discussion – maybe about Angela Merkel’s foreign policies. Women shouldn’t be approached with a drunken ‘Yo baby’ as they are known for preferring to flirt discreetly. Prepare yourself for things to take a little longer but maybe you’re lucky and you discover the often passionate woman under the cold exterior after years of trying and befriending her. If you want to prepare yourself like a true German leaving nothing to chance and being on the safe side to get it right, why not book a weekend ‘flirt workshop’ offered at various institutions nationwide?