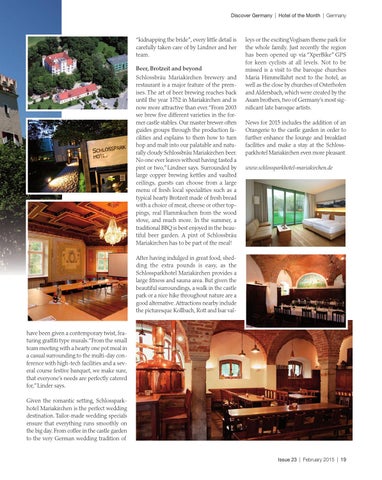 “kidnapping the bride”, every little detail is carefully taken care of by Lindner and her team. Beer, Brotzeit and beyond Schlossbräu Mariakirchen brewery and restaurant is a major feature of the premises. The art of beer brewing reaches back until the year 1752 in Mariakirchen and is now more attractive than ever.“From 2003 we brew five different varieties in the former castle stables. Our master brewer often guides groups through the production facilities and explains to them how to turn hop and malt into our palatable and naturally cloudy Schlossbräu Mariakirchen beer. No one ever leaves without having tasted a pint or two,”Lindner says. Surrounded by large copper brewing kettles and vaulted ceilings, guests can choose from a large menu of fresh local specialities such as a typical hearty Brotzeit made of fresh bread with a choice of meat, cheese or other toppings, real Flammkuchen from the wood stove, and much more. In the summer, a traditional BBQ is best enjoyed in the beautiful beer garden. A pint of Schlossbräu Mariakirchen has to be part of the meal!

leys or the excitingVoglsam theme park for the whole family. Just recently the region has been opened up via “XperBike” GPS for keen cyclists at all levels. Not to be missed is a visit to the baroque churches Maria Himmelfahrt next to the hotel, as well as the close by churches of Osterhofen and Aldersbach, which were created by the Asam brothers, two of Germany’s most significant late baroque artists. News for 2015 includes the addition of an Orangerie to the castle garden in order to further enhance the lounge and breakfast facilities and make a stay at the Schlossparkhotel Mariakirchen even more pleasant. www.schlossparkhotel-mariakirchen.de

After having indulged in great food, shedding the extra pounds is easy, as the Schlossparkhotel Mariakirchen provides a large fitness and sauna area. But given the beautiful surroundings, a walk in the castle park or a nice hike throughout nature are a good alternative. Attractions nearby include the picturesque Kollbach, Rott and Isar val-

have been given a contemporary twist, featuring graffiti type murals.“From the small team meeting with a hearty one pot meal in a casual surrounding to the multi-day conference with high-tech facilities and a several course festive banquet, we make sure, that everyone’s needs are perfectly catered for,”Linder says. Given the romantic setting, Schlossparkhotel Mariakirchen is the perfect wedding destination. Tailor-made wedding specials ensure that everything runs smoothly on the big day. From coffee in the castle garden to the very German wedding tradition of