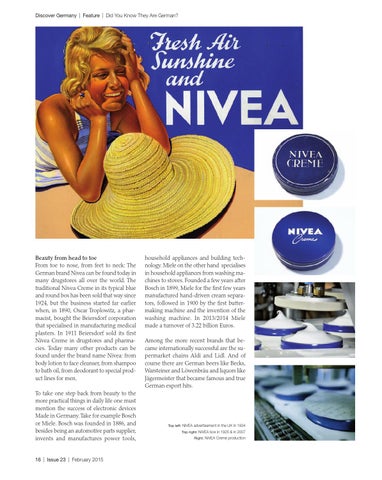 Discover Germany | Feature | Did You Know They Are German?

Beauty from head to toe From toe to nose, from feet to neck: The German brand Nivea can be found today in many drugstores all over the world. The traditional Nivea Creme in its typical blue and round box has been sold that way since 1924, but the business started far earlier when, in 1890, Oscar Troplowitz, a pharmacist, bought the Beiersdorf corporation that specialised in manufacturing medical plasters. In 1911 Beiersdorf sold its first Nivea Creme in drugstores and pharmacies. Today many other products can be found under the brand name Nivea: from body lotion to face cleanser, from shampoo to bath oil, from deodorant to special product lines for men. To take one step back from beauty to the more practical things in daily life one must mention the success of electronic devices Made in Germany. Take for example Bosch or Miele. Bosch was founded in 1886, and besides being an automotive parts supplier, invents and manufactures power tools,

household appliances and building technology. Miele on the other hand specialises in household appliances from washing machines to stoves. Founded a few years after Bosch in 1899, Miele for the first few years manufactured hand-driven cream separators, followed in 1900 by the first buttermaking machine and the invention of the washing machine. In 2013/2014 Miele made a turnover of 3.22 billion Euros. Among the more recent brands that became internationally successful are the supermarket chains Aldi and Lidl. And of course there are German beers like Becks, Warsteiner and Löwenbräu and liquors like Jägermeister that became famous and true German export hits.