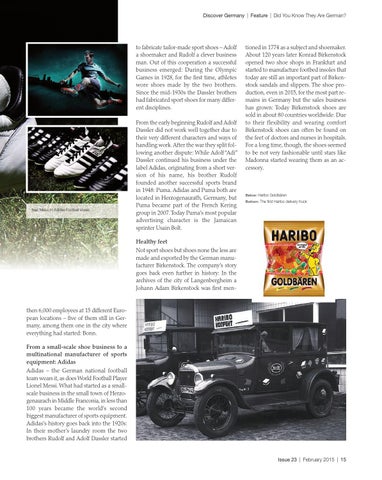 Discover Germany | Feature | Did You Know They Are German?

to fabricate tailor-made sport shoes – Adolf a shoemaker and Rudolf a clever business man. Out of this cooperation a successful business emerged: During the Olympic Games in 1928, for the first time, athletes wore shoes made by the two brothers. Since the mid-1930s the Dassler brothers had fabricated sport shoes for many different disciplines.

From the early beginning Rudolf and Adolf Dassler did not work well together due to their very different characters and ways of handling work. After the war they split following another dispute: While Adolf“Adi” Dassler continued his business under the label Adidas, originating from a short version of his name, his brother Rudolf founded another successful sports brand in 1948: Puma. Adidas and Puma both are located in Herzogenaurath, Germany, but Puma became part of the French Kering group in 2007. Today Puma’s most popular advertising character is the Jamaican sprinter Usain Bolt.

tioned in 1774 as a subject and shoemaker. About 120 years later Konrad Birkenstock opened two shoe shops in Frankfurt and started to manufacture footbed insoles that today are still an important part of Birkenstock sandals and slippers. The shoe production, even in 2015, for the most part remains in Germany but the sales business has grown: Today Birkenstock shoes are sold in about 80 countries worldwide. Due to their flexibility and wearing comfort Birkenstock shoes can often be found on the feet of doctors and nurses in hospitals. For a long time, though, the shoes seemed to be not very fashionable until stars like Madonna started wearing them as an accessory.

Healthy feet Not sport shoes but shoes none the less are made and exported by the German manufacturer Birkenstock. The company’s story goes back even further in history: In the archives of the city of Langenbergheim a Johann Adam Birkenstock was first men-

then 6,000 employees at 15 different European locations – five of them still in Germany, among them one in the city where everything had started: Bonn. From a small-scale shoe business to a multinational manufacturer of sports equipment: Adidas Adidas – the German national football team wears it, as does World Football Player Lionel Messi. What had started as a smallscale business in the small town of Herzogenaurach in Middle Franconia, in less than 100 years became the world’s second biggest manufacturer of sports equipment. Adidas’s history goes back into the 1920s: In their mother’s laundry room the two brothers Rudolf and Adolf Dassler started