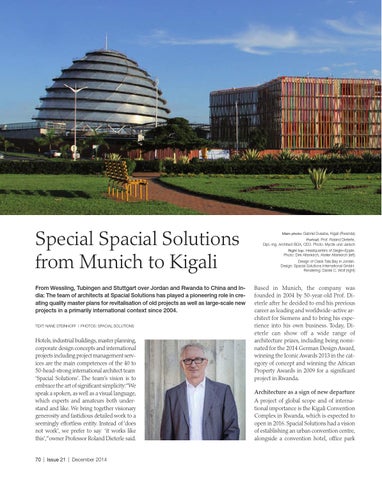 Special Spacial Solutions from Munich to Kigali From Wessling, Tubingen and Stuttgart over Jordan and Rwanda to China and India: The team of architects at Spacial Solutions has played a pioneering role in creating quality master plans for revitalisation of old projects as well as large-scale new projects in a primarily international context since 2004. TEXT: NANE STEINHOFF | PHOTOS: SPACIAL SOLUTIONS

Hotels, industrial buildings, master planning, corporate design concepts and international projects including project management services are the main competences of the 40 to 50-head-strong international architect team ‘Spacial Solutions’. The team’s vision is to embrace the art of significant simplicity:“We speak a spoken, as well as a visual language, which experts and amateurs both understand and like. We bring together visionary generosity and fastidious detailed work to a seemingly effortless entity. Instead of ‘does not work’, we prefer to say ‘it works like this’,”owner Professor Roland Dieterle said.

Based in Munich, the company was founded in 2004 by 50-year-old Prof. Dieterle after he decided to end his previous career as leading and worldwide-active architect for Siemens and to bring his experience into his own business. Today, Dieterle can show off a wide range of architecture prizes, including being nominated for the 2014 German Design Award, winning the Iconic Awards 2013 in the category of concept and winning the African Property Awards in 2009 for a significant project in Rwanda. Architecture as a sign of new departure A project of global scope and of international importance is the Kigali Convention Complex in Rwanda, which is expected to open in 2016. Spacial Solutions had a vision of establishing an urban convention centre, alongside a convention hotel, office park