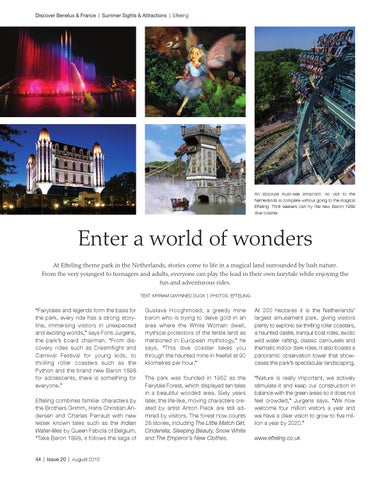 An absolute must-see attraction, no visit to the Netherlands is complete without going to the magical Efteling. Thrill seekers can try the new Baron 1989 dive coaster.

Enter a world of wonders At Efteling theme park in the Netherlands, stories come to life in a magical land surrounded by lush nature. From the very youngest to teenagers and adults, everyone can play the lead in their own fairytale while enjoying the fun and adventurous rides. TEXT: MYRIAM GWYNNED DIJCK | PHOTOS: EFTELING

“Fairytales and legends form the basis for the park, every ride has a strong storyline, immersing visitors in unexpected and exciting worlds,” says Fons Jurgens, the park’s board chairman. “From discovery rides such as Dreamflight and Carnival Festival for young kids, to thrilling roller coasters such as the Python and the brand new Baron 1898 for adolescents, there is something for everyone.” Efteling combines familiar characters by the Brothers Grimm, Hans Christian Andersen and Charles Perrault with new lesser known tales such as the Indian Water-lilies by Queen Fabiola of Belgium. “Take Baron 1898, it follows the saga of

Gustave Hooghmoed, a greedy mine baron who is trying to delve gold in an area where the White Women dwell, mythical protectors of the fertile land as mentioned in European mythology,” he says. “This dive coaster takes you through the haunted mine in freefall at 90 kilometres per hour.”

The park was founded in 1952 as the Fairytale Forest, which displayed ten tales in a beautiful wooded area. Sixty years later, the life-like, moving characters created by artist Anton Pieck are still admired by visitors. The forest now counts 28 stories, including The Little Match Girl, Cinderella, Sleeping Beauty, Snow White and The Emperor’s New Clothes.

“Nature is really important, we actively stimulate it and keep our construction in balance with the green areas so it does not feel crowded,” Jurgens says. “We now welcome four million visitors a year and we have a clear vision to grow to five million a year by 2020.” www.efteling.co.uk