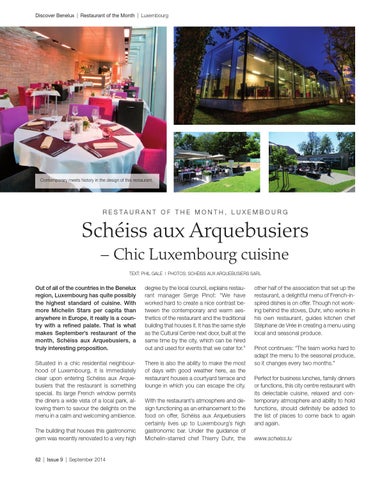 Contemporary meets history in the design of this restaurant.

Out of all of the countries in the Benelux region, Luxembourg has quite possibly the highest standard of cuisine. With more Michelin Stars per capita than anywhere in Europe, it really is a country with a refined palate. That is what makes September’s restaurant of the month, Schéiss aux Arquebusiers, a truly interesting proposition.

degree by the local council, explains restaurant manager Serge Pinot: “We have worked hard to create a nice contrast between the contemporary and warm aesthetics of the restaurant and the traditional building that houses it. It has the same style as the Cultural Centre next door, built at the same time by the city, which can be hired out and used for events that we cater for.”

Situated in a chic residential neighbourhood of Luxembourg, it is immediately clear upon entering Schéiss aux Arquebusiers that the restaurant is something special. Its large French window permits the diners a wide vista of a local park, allowing them to savour the delights on the menu in a calm and welcoming ambience.

There is also the ability to make the most of days with good weather here, as the restaurant houses a courtyard terrace and lounge in which you can escape the city.

With the restaurant’s atmosphere and design functioning as an enhancement to the food on offer, Schéiss aux Arquebusiers certainly lives up to Luxembourg’s high gastronomic bar. Under the guidance of Michelin-starred chef Thierry Duhr, the

other half of the association that set up the restaurant, a delightful menu of French-inspired dishes is on offer. Though not working behind the stoves, Duhr, who works in his own restaurant, guides kitchen chef Stéphane de Vrée in creating a menu using local and seasonal produce. Pinot continues: “The team works hard to adapt the menu to the seasonal produce, so it changes every two months.” Perfect for business lunches, family dinners or functions, this city centre restaurant with its delectable cuisine, relaxed and contemporary atmosphere and ability to hold functions, should definitely be added to the list of places to come back to again and again. www.scheiss.lu